Collecting the top picks of the 2015 MLB Draft

By Dave and Adam's Card World on June 9, 2015 in Panini, Sports Card News and New Products

While many of the top picks taken Monday night in the opening rounds of the 2015 MLB Draft will be available later this year in 2015 Bowman Draft Baseball, there are several that already have cards available to find thanks to their involvement with USA Baseball. A total of 12 players taken in the first round, including three of the top four, can be found in USA Baseball products produced by Panini in recent years. 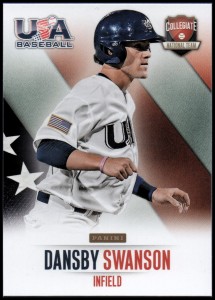 Swanson was the first of three-straight shortstops taken to begin the 2015 MLB Draft. He led Vanderbilt to the NCAA Baseball national championship in 2014, and is having a big year in 2015 with 14 home runs and .348 batting average. Swanson appears in 2014 and 2015 Panini USA Baseball products with autograph and memorabilia auto cards available. 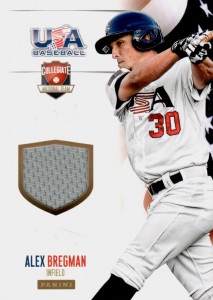 Bregman and Swanson get compared often since both played together with USA Baseball. The consensus among experts is that Bregman is the better hitter of the two. He’s hitting .318 this year for LSU with nine homers and 47 RBIs. Bregman was named USA Baseball’s player of the year when he was just 16 years old. You can actually find early cards of Bregman in 2010 Bowman Draft, 2010 Bowman Chrome Draft and 2011 Bowman Chrome as a member of the 18U National Team. He’s also appeared in Panini’s USA Baseball products from 2013-2015 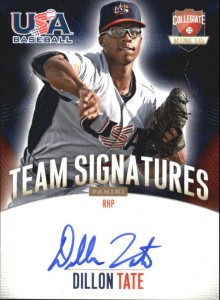 Tate slipped down some draft boards after being projected as a potential #1 pick earlier in the year. He finished up his first year as a starter for UC Santa Barbara with an 8-5 record and a 2.26 ERA. Tate has what SI.com calls an intimidating fastball and a pretty nasty slider. Tate appears 2014 and 2015 USA Baseball products from Panini.

Dave and Adam's is one of the largest sellers of trading cards and collectibles in the world. Located just outside of Buffalo NY, the company operates two retail stores as well as the e-commerce website www.dacardworld.com
View all posts by Dave and Adam's Card World →
2015 Topps Finest Baseball preview
Shaq inks deal with Upper Deck