By Dave and Adam's Card World on August 14, 2015 in Panini, Sports Card News and New Products

Panini Playbook has quickly become one of the more popular releases on the football trading card calendar. The unique set that is centered around booklet autograph and relic cards, many of which have large memorabilia swatches or multiple swatches, provides some of the best looking cards of the NFL season. Hobby boxes will come with two autograph or memorabilia cards, with one being a booklet auto or relic. 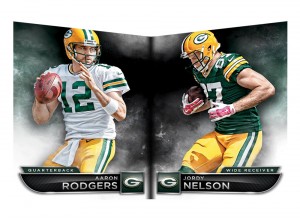 The Playbook theme is stepped up a notch for 2015 with a base set made up entirely of booklet cards. Base cards appear to feature multiple players and will have four levels of parallels. 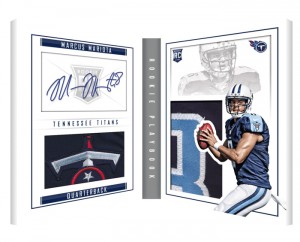 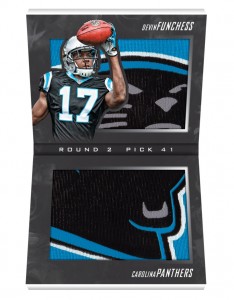 Memorabilia booklets returning for 2015 include Rookie Booklet Complete Logos that with full logo patches from jerseys worn at the NFLPA Rookie Premiere. Down & Dirty booklets come with game worn jersey swatches complete with grass and dirt stains. Armory booklets, a staple of all Playbook releases, come with six relic swatches and a player photo that stretches across both panels of the card. Down & Dirty, Armory and Game of Inches booklets are numbered to 25 or less. 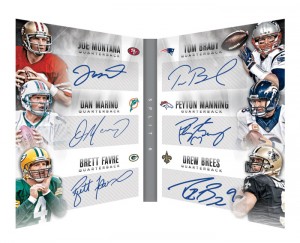 Split Six Signatures autograph booklets come with six player autographs per card and are numbered to 25 or less. The checklist include rookies, current stars and retired legends. 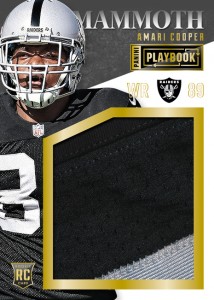 Mammoth Materials are one of the few non-booklet cards in 2015 Playbook, but contain jumbo-sizes relic pieces. Parallel versions include one-of-ones with NFL Shield logo patches.

Dave and Adam's is one of the largest sellers of trading cards and collectibles in the world. Located just outside of Buffalo NY, the company operates two retail stores as well as the e-commerce website www.dacardworld.com
View all posts by Dave and Adam's Card World →
2015 Leaf Metal Draft Baseball preview
Upper Deck announces Connor McDavid redemption contest for 2015-16 O-Pee-Chee Hockey