By Dave and Adam's Card World on March 18, 2015 in Panini, Sports Card News and New Products

Panini continues to keep the memory of Donruss of alive with a brand new baseball set centered around the iconic Diamond Kings cards that were a staple of Donruss products. Diamond Kings inserts first appeared in 1982 Donruss Baseball and were included in every set until the company’s final baseball release in 2005. Donruss even released their own set called Diamond Kings Baseball from 2002-2005. Base cards use the artistic renderings of players in place of pictures. The base set will also come with several levels of parallels.

Diamond Kings marks the return of Babe Ruth cards to a Panini product for the first time in ten years. Ruth is featured prominently in Diamond Kings, including memorabilia cards of the “Great Bambino”. 2015 Panini Diamond Kings will also have the first autographed memorabilia cards of this year’s crop of rookies. DK Mini Materials Framed uses the base card design, but shrinks it down to resemble a tobacco card. The card has a frame around it and a memorabilia swatch. HOF Heroes Signature Materials pay tribute to players enshrined in Cooperstown with an autograph plus two memorabilia swatches. Hall of famers that are a part of this set include George Brett, Ryne Sandberg, Carlton Fisk, Randy Johnson and Nolan Ryan. Sketches and Swatches are memorabilia auto cards that use player images that look like they’ve been sketched in pencil. Look for more auto relic content in Sovereign Signatures. Studio Portrait Framed Materials use an up-close image of a player and include two memorabilia pieces. Masters of the Game are memorabilia cards that feature stars both past and present. Diamond Cuts feature cut signatures from 20 players and are numbered to 99 or less. Some of legendary players included in the set are: Bob Feller, Stan Musial, Harmon Killebrew and Warren Spahn. 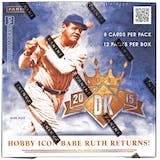 Dave and Adam's is one of the largest sellers of trading cards and collectibles in the world. Located just outside of Buffalo NY, the company operates two retail stores as well as the e-commerce website www.dacardworld.com
View all posts by Dave and Adam's Card World →
2014-15 Upper Deck Ultimate Collection Hockey preview
Dave & Adam’s now paying more for vintage wax