By Dave and Adam's Card World on September 22, 2015 in Panini, Sports Card News and New Products

The gold standard for football rookie cards, Panini Contenders, arrives this December with appears to be a promising crop of rookie cards to deliver. With the likes of Marcus Mariota, Jameis Winston, Melvin Gordon and Amari Cooper off to promising starts and a few diamonds in the rough yet to make their presence felt, it should be a fun year chase Contender’s Autographed Rookie Tickets.

Hobby boxes of 2015 Panini Contenders Football will have contain five autographs, including one to two with on-card signatures from players that attended the NFL Rookie Premier. There are several versions of the autographed tickets to uncover, including Playoff Tickets, Championship Tickets, Cracked Ice Tickets, Super Bowl Tickets and printing plates. New for 2015 are Rookie Ticket College Variations autos that feature 2015 rookies in their college uniforms, which is something we already got a taste of this past spring in Contenders Draft Picks Football.

Parallel versions for Ticket autographs include one-of-one Golden Tickets and Silver Tickets numbered out of two.

Additional autograph cards from members of the 2015 draft class can be found in Rookie Ink. These have Gold (#’d to 25) and Holo Gold (#’d 1/1) parallel versions.

Round Numbers insert cards return featuring players drafted in the dame round. Look signed versions with dual autographs on them.

Autographs from veteran players and retired legends are also available in 2015 Contenders with signed versions of MVP Contenders and Legendary Contenders inserts. 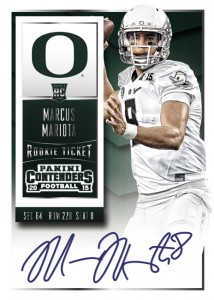 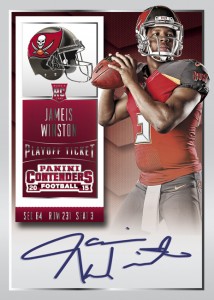 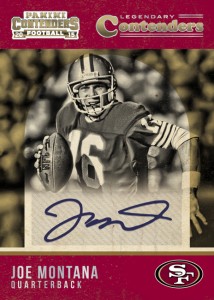 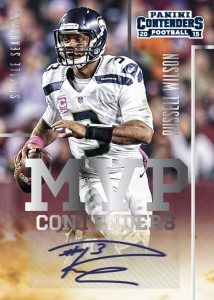 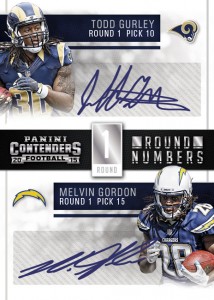 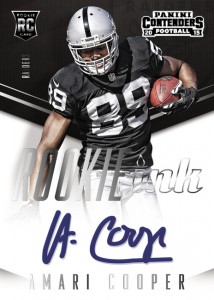 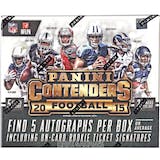 Dave and Adam's is one of the largest sellers of trading cards and collectibles in the world. Located just outside of Buffalo NY, the company operates two retail stores as well as the e-commerce website www.dacardworld.com
View all posts by Dave and Adam's Card World →
2015 Panini Prizm Football preview
Remembering Yogi Berra