By Dave and Adam's Card World on October 30, 2014 in Panini, Sports Card News and New Products

Panini returns the hit-filled and Prizm-packed Select brand to football with 2014 Panini Select, which comes out on December 3. Each master box of Panini Select comes with two mini-boxes that contain five packs each. Boxes will contain four autograph or memorabilia cards (2-3 autograph and 1-2 memorabilia), four rookies and four Prizms that are split evenly between the two mini boxes.

New for the 2014 edition of Panini Select Football are interactive chase cards that can be redeemed for limited Special Edition Select Prizm sets. There are 32 Super Bowl Selections Team cards, 20 MVP Contenders, 24 Offensive and 24 Defensive Rookie of the Year Contenders cards to collect. If you have the card the team or player that wins the award at the end of the 2014 NFL season you can then redeem for the special Prizm set.

100 Rookie Autograph and 40 Rookie Autograph Jersey cards come numbered and feature the signatures of first-year players. Both of these sets come with nine levels of parallels that are similar to the base set.

Inside each case of Panini Select Football is one hot mini box. These hot boxes have exclusive Mojo Prism Parallels of Rookie base, Rookie Autograph and Rookie Autograph Jersey cards that can’t be found anywhere else. Mojo parallels are numbered to 75 or less. 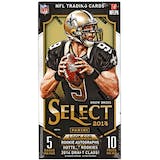 Dave and Adam's is one of the largest sellers of trading cards and collectibles in the world. Located just outside of Buffalo NY, the company operates two retail stores as well as the e-commerce website www.dacardworld.com
View all posts by Dave and Adam's Card World →
DA Cardworld announces Hit Parade: All-Sport Rookie Edition Series 2
2015 Garbage Pail Kids Series 1 preview