By Dave and Adam's Card World on October 16, 2014 in Panini, Sports Card News and New Products

Next week will be the time to crack the books open with the release of 2014 Panini Playbook Football. Every pack of Playbook will come with one book card plus an additional autograph or memorabilia card.

Leading the booklet card cavalcade is Armory, which makes its football debut, featuring six pieces of memorabilia and a large player picture spanning both pages of the booklet. Down & Dirty book cards have swatches from game-worn jerseys complete with grass and mud stains. Game of Inches comes with a pair of jumbo swatches along with the player stretched across both pages of the book.

Player Booklet Signatures and Rookie Booklet Signatures pair jersey swatches with a player autograph. Look for special parallel cards with 1-of-1 printing players, Nike Swooshes and NFL Shields. Combos cards have signatures or jersey swatches from two players in one booklet. Rookie cards also have Signature Plays cards with hand-drawn play diagrams on the card. Panini has also hinted through social media that there are coach play diagram cards, including one from Bill Parcells. Hall of Fame Anniversary cards commemorate members of the Pro Football Hall of Fame with a picture and their signature. Additional autograph cards can be found in the Signature Materials set. 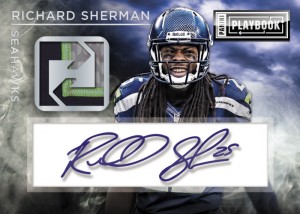 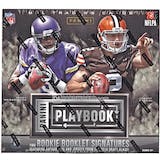 Dave and Adam's is one of the largest sellers of trading cards and collectibles in the world. Located just outside of Buffalo NY, the company operates two retail stores as well as the e-commerce website www.dacardworld.com
View all posts by Dave and Adam's Card World →
Upper Deck teases big hits from 13-14 The Cup Hockey
2015 Bowman Baseball preview