By Dave and Adam's Card World on March 16, 2015 in Panini, Sports Card News and New Products

2014 Panini National Treasures Football will close the book on the most recent NFL season from a hobby standpoint. National Treasure will give a high-end sendoff to a season that will be remembered for its excellent crop of rookie wide receivers and the Patriots’ return to glory as Super Bowl 49 champions.

Boxes of 2014 National Treasures will come with three autographs, three memorabilia cards and two rookie or legend base cards numbered to 99 or less. 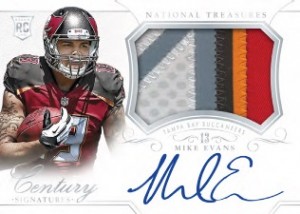 Headlining the rookie content in 2014 NT Football are Rookie Century Materials Signatures. These come with an on-card signature and a jumbo-sized jersey swatch. Base and jersey number versions are numbered to 99 with Silver (#’d to 25), Gold (#’d to 10), Blue (#’d to 5) and Black (#’d to 5) parallels. Special one-of-one editions  include Laundry Tags, Brand Logos, NFL Shields and Printing Plates.

Additional rookie signatures can be found on Jumbo Prime memorabilia booklets, Hats Off and NFL Gear. 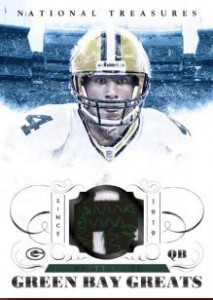 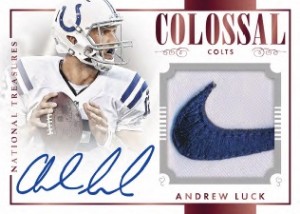 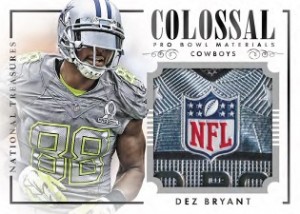 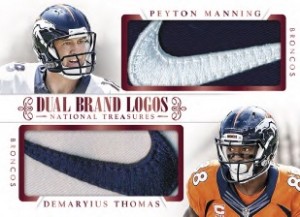 Brand Logo and NFL Shield patch cards will be available in single and dual versions. Brand Logos can be numbered to two or less while NFL Shields will be one-of-ones.

Dave and Adam's is one of the largest sellers of trading cards and collectibles in the world. Located just outside of Buffalo NY, the company operates two retail stores as well as the e-commerce website www.dacardworld.com
View all posts by Dave and Adam's Card World →
Dave & Adam’s at Grand Prix Cleveland 2015
Dave & Adam’s pulls the wraps off first Hit Parade Autographed Jersey product