By Dave and Adam's Card World on September 26, 2014 in Panini, Sports Card News and New Products

Panini has brought back one of its high-end hits from last year with 2013/14 Panini Flawless Basketball, which releases next week. With its high-end price tag comes some high quality hits inside the briefcase that holds one lone pack. Every pack contains six autographs along with two Jumbo Prime memorabilia cards and two base cards. All of the cards in set are numbered to 25 or less. Panini stepped up their game with the autographs in this year’s set of Flawless. They signed deals with several players, including Allen Iverson, Dwyane Wade, Carmelo Anthony and Manu Ginobili, who don’t have many signed cards available or none at all.  The on-card signatures can be found by themselves or with a small piece of jeresey. There are also plenty of Jumbo Prime memorabilia cards feature large swatches of jerseys. Panini has secured jerseys from both current stars and rookies as well as legends of the game. Be sure check out this amazing product and watch our case break on October 1 at 5 PM EST. 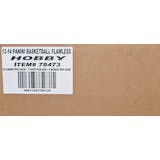 Dave and Adam's is one of the largest sellers of trading cards and collectibles in the world. Located just outside of Buffalo NY, the company operates two retail stores as well as the e-commerce website www.dacardworld.com
View all posts by Dave and Adam's Card World →
#DACWPulls: “Crazy cases” of 2013/14 Panini Immaculate Basketball
Dave & Adam’s “Leaders of the Pack” for Week 4