Upper Deck shares their plans for the 2018 National

By Dave and Adam's Card World on July 2, 2018 in National Convention, Upper Deck

We are only 30 days away from the 39th annual National Sports Collectors Convention, coming to Cleveland and the I-X Center from Wednesday, August 1st through Sunday, August 5th! Regulars of the blog (and attendees) know that Dave & Adam’s will be there all week in full force with amazing deals and specials! One of the big highlights for attendees is all of the special promotions that the top card manufacturers run during the week. This year is no different as Upper Deck will be once again running a variety of exclusive promotions for fans in attendance that will make this year’s National another can’t miss event!

Previous attendees of the show know all about Upper Deck’s Wrapper Redemption Program and this year Upper Deck follows a familiar approach with their National Black Packs. The packs produced just for the National allow attendees to get their hands on some special items. Attendees can find both Prominent Cuts cards which feature a variety of past and present greats from various sports and NHL Top Shelf Rookie cards of this past seasons prospects in the redemption packs. Randomly inserted into these packs are limited autograph cards as well! Some of the names to look for include Michael Jordan, Connor McDavid, Wayne Gretzky, and Shohei Ohtani! 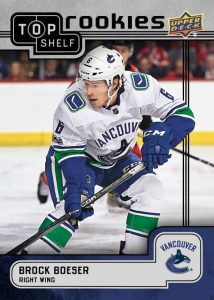 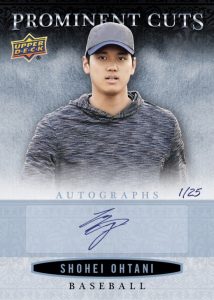 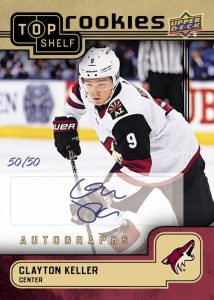 These packs must be purchased from an Upper Deck Certified Diamond Dealer (shameless plug like Dave & Adam’s) who will provide attendees with an Upper Deck issued voucher for the redemption program. The program will begin at the start of the show each day and run as long as supplies last. Attendees can take advantage of the promotion up to four times per person, per day.

Attendees who like cracking cases are in store for another great promotion! You can open a sealed case purchased from a Certified Diamond Dealer at the show of 2017/18 Ultimate Collection (8 count case), 2017/18 Upper Deck ICE (10 count case), or 2017/18 Premier (5 count case) without waiting in any lines at any time throughout the show to receive eight 2018 Upper Deck National Black packs and one Case Breaker raffle ticket good for a random memorabilia item, premium hobby pack/box, premium trading card or Prominent Cuts VIP Autograph card. 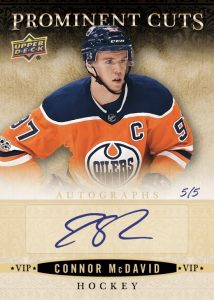 The item selected will be immediately available to the winner. As mentioned earlier we are a Certified Diamond Dealer, so you’ll be able to buy the qualifying cases right from our booth!

Other specials Upper Deck has planned include their Monumental Blind Boxes and a Cleveland Legends Promotion. The Upper Deck Authenticated Monumental Promotion is Upper Deck’s take on the ever-popular blind box offering. Each box contains five signed Upper Deck Authenticated memorabilia items. There will only be 150 of these boxes produced for the price of $1,000 per box. All of Upper Deck’s various spokesmen will have content in the boxes and there will be some special boxes as well like Hot Boxes that contain only Ben Simmons items or Tiger Woods items for example and boxes that contain one auto each from Michael Jordan, LeBron James, Tiger Woods, Serena Williams, and Ben Simmons. The Cleveland Legends Promotion gives attendees who purchase five hobby packs of any 2017/18 Upper Deck product during the show two limited-edition Cleveland Legends cards of LeBron James. Although King James recently signed with the LA Lakers, the cards show LeBron as he was just getting started and after he had brought a championship back to his Ohio home! 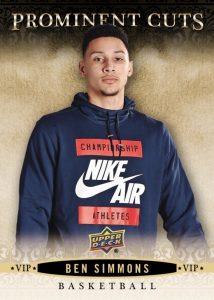 Upper Deck will also run a variety of free raffles each day. Make sure you are at the Upper Deck booth shortly before these scheduled times to score your free ticket: Wednesday at 6pm, Thursday at 5pm, Friday at 2pm, Saturday at 12:30pm, and Sunday at 1pm. Also on Saturday at 2pm Upper Deck will host the Ultimate case break where attendees can score slots in a break for one of Upper Deck’s most premium releases of the year. At 3pm Upper Deck will co-host with GTS Distribution a collation game in a bracket-style format. 16 competitors will face-off to put sets together in numerical order as quickly as possible. There will be prizes distributed throughout the game, but the grand prize winner will score a signed piece from Upper Deck Authenticated!

For more information on what Upper Deck has planned for the National, please check out their website and keep it locked here on our blog for any updates. The show team at Dave & Adam’s is looking forward to meeting and spending time once again with many of our great customers next month! Don’t miss out on the largest and greatest sports convention of the year, I’ll see YOU at the National!

Dave and Adam's is one of the largest sellers of trading cards and collectibles in the world. Located just outside of Buffalo NY, the company operates two retail stores as well as the e-commerce website www.dacardworld.com
View all posts by Dave and Adam's Card World →
DACW Live – The Best Box Break Hits of the Week 6/25 – 7/1
2018 Panini Absolute Football details and release date!