By Dave and Adam's Card World on July 6, 2017 in National Convention

Leaf has shared with us their plans for this year’s 38th annual National Sports Collectors Convention! This year’s show is taking place at the Donald E. Stephens Convention Center in Chicago from Wednesday, July 26th through Sunday, July 30th. As always Dave & Adam’s will be there in full force and Leaf has three great redemption programs for attendees making their way to the Windy City! 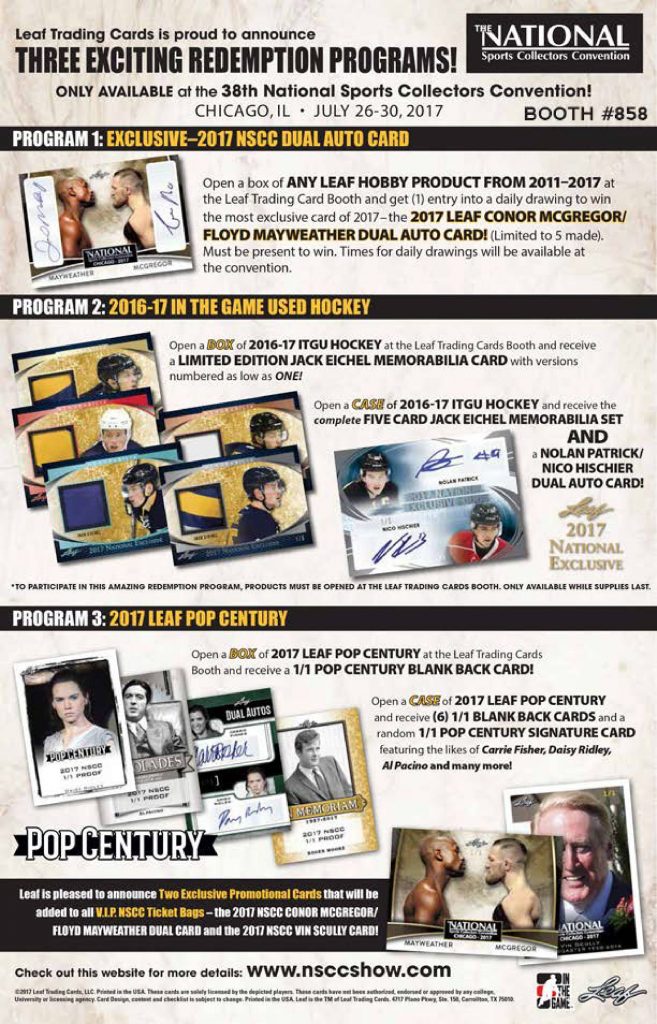 Leaf’s first program focuses on ‘The Money Fight’ this August between Floyd Mayweather Jr. and Conor McGregor. Attendees who open a box of any Leaf hobby product from 2011-2017 at the Leaf Trading Cards Booth will get one entry into a daily drawing to win one of the most exclusive cards of the year; the 2017 Leaf Floyd Mayweather Jr./Conor McGregor Dual Autograph Card! There will only be five cards made and one will be given away each day of the show.

The second program revolves around the ice. Attendees who open a box of 2016-17 ITG Used Hockey at the Leaf Trading Cards Booth will receive a limited edition Jack Eichel memorabilia card with versions numbered as low as 1:1! If that wasn’t enough to make you wish the temperature was lower for some hockey games in Chicago that week, those who open a case of 2016-17 ITG Used Hockey will receive the complete five card Jack Eichel memorabilia set and a Nico Hischier/Nolan Patrick (the 1st and 2nd overall picks in last month’s NHL draft which was also held in the Windy City) Dual Autograph Card!

For more information on what Leaf has planned for the National, please check out their website here. Myself and the team at Dave & Adam’s are looking forward to meeting many of our great customers at the end of the month. Don’t miss out on the largest and greatest sports convention of the year, I’ll see YOU at the National!

Dave and Adam's is one of the largest sellers of trading cards and collectibles in the world. Located just outside of Buffalo NY, the company operates two retail stores as well as the e-commerce website www.dacardworld.com
View all posts by Dave and Adam's Card World →
Upper Deck unwraps it’s plans for the 2017 National Sports Collectors Convention
Tristar’s plans for the 2017 National Sports Collectors Convention are set