The NBA and NHL Playoffs are starting to reach their peaks, Baseball is in full midseason swing and Spring is sprunging here in Western New York! Welcome back to yet another edition of everybody’s favorite, weekly, employee highlight series – MVP Monday here at Dave & Adam’s!

This week we’re highlighting one of the most interesting parts of the Dave & Adam’s machine – Joe Sweeney-Steet – our Head Gaming Buyer!

What is your favorite movie & why?

10 Things I Hate About You? More like 100 things I love about that movie!

Do you have any pets?

Phoenix, the Red Shouldered Hawk
Orion, the Red Tailed Hawk
Odin, the Raven
Two baby chickens too, they are chicken McNugget and chicken A La King 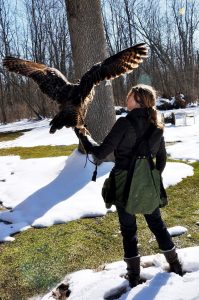 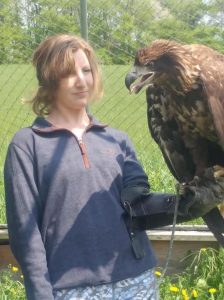 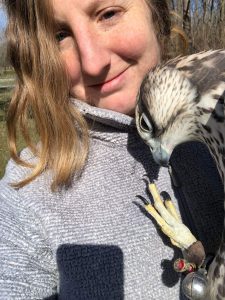 Bird house? More like estate! What a fine flock of falcons (and Hawks…and a Raven…and Chickens) you got there! Shout out to Wild Spirit!

What are your favorite sports teams and why?

The Bills, because my wife is a huge football fan.

Happy wife, happy life! And I bet she’s plenty happy after this past season!

Are you a former/current athlete?

I boxed, did some Arnis and Kali stick fighting too. I also entered the CrossFit Strongman competition at the 2011 Arnold Sports Classic, ran the 2011 Buffalo Marathon and did a Tough Mudder at Mount Snow in 2012.

*Note to self* Do NOT challenge Joe to a Kali stick fight! or any athletics competition for that matter!

What’s an interesting fact about you?

For three years my only income was playing poker, I was quite good.

I also used to do stand-up comedy back in the day, I was often quite bad. I had one bit that was a deadpan, monotone reading of Soulja Boy’s Crank That to highlight how poorly written it was, and the joke always fell flat. I had done it at The Comedy Celler in The Olive Tree and then a little later Late Night with Conan O’Brien had James Lipton do the exact same thing on air and it killed. I don’t know if a writer saw my bit and stole it, or if it was just parallel discovery, but I point to it as me being funny enough to write for Conan’s show.
Well I know who’s table to avoid in the upcoming company Poker tournament! And I have no facts to back this up, but I’m positive Conan stole your joke!
What’s an interesting fact about you?
In 2012, my friend Ryan broke my hand while we were sparring with Kali sticks. In 2021, he was the glider stunt double for the Green Goblin in ‘Spider-Man: No Way Home’.

Might have to toss out my note to self from earlier! I’ll gladly Kali stick fight with Joe if it means I can be in the sixth highest grossing film of all time!
What’s your favorite travel destination/vacation spot?
Vegas – for the food.

There’s A LOT of reasons to go to Vegas, but for the food? I can’t disagree! Have you seen those buffets!?
What 2 items would you want on you if you were stranded on a deserted island (food and water covered)?
They’re not really items but if it’s a safe island I’d want my wife and child with me.

A family man through and through! Plus, it’s technically a free tropical vacation! Now that’s galaxy brain thinking.
Is cereal soup? Why or why not?
If there’s milk, yes, but I eat all my cereal dry. Soup is anything with a liquid involved. Your hand soap is soup most likely.
I was excited to see the answers to this one, but now I’m questioning if every liquid in my life is a soup! Hand soap?! Hahaha
What’s your favorite product that we sell?
I usually get a collector booster box or two per Magic the Gathering set.

Nothing better than cracking into a fresh product! I might not have the first clue how to play but seeing Joe and other employee’s enthusiasm have me wanting in on the fun! Might grab myself a box or two!
Do you have any collections of your own?
Magic, Pokemon, and comic books. I really like Magic the Gathering.

I’m a Pokemon man myself! My all-time favorite? Ampaharos!  Also love me some comics! Check out some of the awesome Hit Parade Comic products!
What was your career before DA/HP?
Analytical biochemist.
Analytical whatemist!? The story of Joe Sweeney-Steet adds another fold! What can’t this guy do!
Is there a particular moment or time that sticks out about your experience here?
Picked up a gem mint alpha set while running a magic tournament in California!

Oh man now that is a find and a half! Even I know how rare those Alpha cards are! Few things sweeter than finding a grail like that!
What makes you love your job?
I play with children’s trading cards all day long!

Getting to play with cards is certainly a perk of the job! Hard to find anyone here at D&A who doesn’t have some sort of collection or hobby passion themselves – one of the best parts about working here!
What has been your biggest challenge here, and what did you do to solve it on your own?
Clickbait articles generate some massive misinformation on the value of items, the number one offender being the Machamp from the learn to play deck which is basically worthless but people list it for 10k+. So I’ve kept aside all of them that we’ve ever gotten in collections so I can send people a picture of a thousand of them laid out as proof that this is not thousands of dollars.
Keeping our customers informed is always a priority! But just to be clear…this Machamp isn’t going to buy me a first edition base set blister pack?
Thank you for once again joining us for our MVP Monday spotlight! Be sure to follow us on Facebook, Twitter, and Instagram for updates on all things Dave and Adam’s!