By Dave and Adam's Card World on September 15, 2015 in Gaming News & New Products, Magic the Gathering

We’re back with another Dave and Adam’s FNM recap. First up we have our overall winner from our 8/28 FNM, Mike Falsetti:

1x Back to Nature

Mike won our Standard event recently with Abzan Control. The Green/Black/White deck looks to control the board early or rip through the opponent’s hand with Thoughtsieze (or the sideboard Duress), Ultimate Price and Bile Blight, and in the mid-game using Languish or End Hostilities and Elspeth, Sun’s Champion. After the deck has stabilized it usually finishes things off with the whole crash of Rhinos, a transformed Nissa or an Elspeth emblem. The deck is essentially a case study in value, including many spells which have the opportunities 2-for-1s, a way to buy everything back in Den Protector and having Delve removal spell, being able to use the graveyard as a resource and getting even more value out of your cards after you’ve used them. Mike says he’s been working on the list with his friend and previous FNM winner Peter Bloomingdale, and the list has striking similarities to world champion Seth Manfield’s Abzan Control list as well. 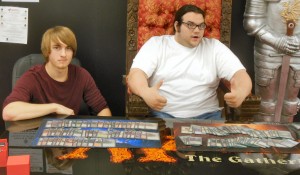 Also pictured, to the left, is our Modern winner from that evening, Cale Fryer and his Jund list. Green/Red/Black, also known as Jund is another case study for trying to eek out as much value from each of your cards as possible. The deck looks to trade 1-for-1 with the opponent’s cards with its removal spells, such as Lightning Bolt, Terminate and Abrupt Decay in the early game and 2-for-1 with cards like Kolaghan’s Command and Maelstrom Pulse. Meanwhile the deck is looking to stick a resilient threat, usually multi-format all-star Tarmogoyf, but Tasigur, the Golden Fang does make an appearance occasionally, as does Olivia Voldaren and Huntmaster of the Fells. By the mid-to-late game, the opponent is usually out of answers and is unable to deal with the large, cheap creature backed up with removal and discard.

Finally we have our most recent Standard winner from the week of 9/6, Eric Quattro’s Blue/Red Ensoul Artifact:

Blue/Red Ensoul Artifact became popular after the most recent Pro-Tour, Pro Tour Magic Origins back in July. The point of the deck is to play a cheap artifact, ideally a Darksteel Citadel or Ornithopter, and buff its stats on turn two. The preferred method of achieving this is through Ensoul Artifact, which turns the enchanted artifact into a 5/5 creature, which in the case of Darksteel Citadel, it would be indestructible and in the case of Ornithopter, it would have flying. Attacking on turn two with a 5/5 flyer tends to end games very quickly when you begin at 20 life. The deck is capable of other lines of play than Ensoul-ing a turn one Ornithopter, as well. The deck also contains recent breakout card from Magic Origins, Hangarback Walker. The card provides longer-term value as being a multi-turn speed bump, saving the deck valuable life against other aggressive decks. You can even play it for free if you have a Chief of the Foundry in play.

Standard and Modern are changing nearly every week. Will we see something new next time? Have a brew of your own you want to show off? Come to Dave and Adam’s Friday Night Magic every week for your chance to be showcased right here.

Dave and Adam's is one of the largest sellers of trading cards and collectibles in the world. Located just outside of Buffalo NY, the company operates two retail stores as well as the e-commerce website www.dacardworld.com
View all posts by Dave and Adam's Card World →
2015 Topps Archives Signature Series Baseball preview
Predictions for the 2015 NASCAR Chase for the Sprint Cup