By Dave and Adam's Card World on October 14, 2014 in Gaming News & New Products, Magic the Gathering

Welcome back to Dave and Adam’s FNM recap. Khans of Tarkir is still barely in people’s hands and players have been dying to delve into it. Our Standard winner’s deck from October 3rd was the first we’ve seen in to use the new cards: 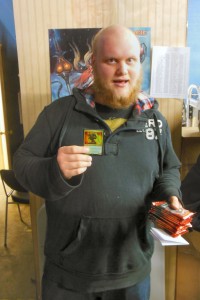 Steven’s deck should look fairly familiar, as he’s piloted it to some success here in the past. His deck is the first we’ve seen to use cards from Khans of Tarkir, including the ubiquitous fetchlands and Sarkhan, the Dragonspeaker. Steven’s deck was packed to the gills with removal and resilient creatures, and used card advantage from sources such as Courser of Kruphix and even Read the Bones in order to try to out-attrition his other midrange opponents. Jund looks like it is well positioned going forward, due to the fact it has 2 fetchlands available to it, as well as most of the creatures from last Standard that made the deck as good as it was.

Our winner from Modern that same week was Andy Skorik, who brought Affinity:

We’ve had other Affinity decks in the spotlight before, and his list looks to be fairly straightforward. While Robots (as it’s also known) is considered to be the best aggressive deck in the format, that by no means makes it an easy deck to pilot. Experienced players can sometimes go all the way through extra turns in the mirror match. Andy has stretched his mana to the limits with his deck, opting to run Ensoul Artifact, Master of Etherium, Galvanic Blast and Thoughtseize in his mostly colorless beatdown deck, although it is eased somewhat with cards like Springleaf Drum, Mox Opal and Glimmervoid.

If you want to see these decks and more, come out to Buffalo’s largest Friday Night Magic tournament every week at our Transit Road store.

Dave and Adam's is one of the largest sellers of trading cards and collectibles in the world. Located just outside of Buffalo NY, the company operates two retail stores as well as the e-commerce website www.dacardworld.com
View all posts by Dave and Adam's Card World →
2014 Topps Five Star Football preview
Stan Lee Autographed Photo Winner from New York Comic Con!