By Dave and Adam's Card World on October 28, 2014 in Gaming News & New Products, Magic the Gathering

Hello everybody, and welcome back to Dave and Adam’s Friday Night recap. First up, our winners from two weeks ago Joe Cox and Adam Stadelman: 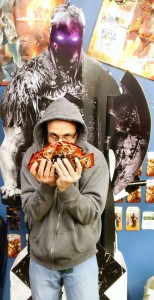 2x Purphoros, God of the Forge

Joe managed to win Standard in back-to-back weeks, running back the same list that got him there the first time. He explained to me how he tries to be mindful of sweepers, such as Bile Blight, which is one of the few ways to effectively deal with value creatures like Goblin Rabblemaster and Hornet Queen, the latter of which is a nightmare for the Abzan lists that are running around.Adam won our Modern event that week, with his Affinity list: 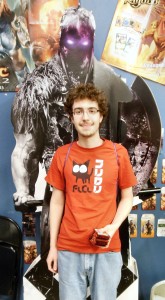 1x Illness in the Ranks

Adam was running a fairly stock Affinity list, with one minor tweak. This time he decided to cut one Memnite for a singleton Ghostfire Blade from Khans of Tarkir. There has been some speculation as to whether or not the new equipment will find a home in the mostly colorless aggro deck, and Adam seemed to find some success with the new card here.

Moving up to our events from this past week, we have two new faces atop our standings, 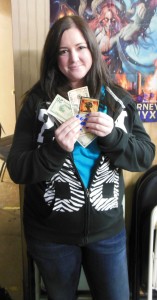 4x Butcher of the Horde

3x Anger of the Gods

3x Chained to the Rocks

1x Anger of the Gods

1x Erebos, God of the Dead

Melissa took her take on Mardu control to the top of our Standard standings this past weekend. She looked to control the board with lots of spot removal, including the full
four of Hero’s Downfall and Utter End, and even including the full four maindeck Thoughtseize, and Despise to tear opponents’ hands apart. Once her opponents had nothing left on board or in their hands she could end the game quickly with a Stormbreath Dragon, Sarkhan, the Dragonspeaker, or a Butcher of the Horde. Finally, our Modern winner from this past weekend was Erik Quattro: 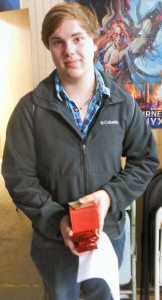 2x Anger of the Gods

2x Chalice of the Void

Eric brought Red/Blue/Green Scapeshift to our FNM this past weekend. Scapeshift is a combo deck that looks to build up a critical mass of lands in play, then cast Scapeshift. They sacrifice any number of lands to the sorcery’s effect, and then search their library for basic lands equal to the number of lands sacrificed. The deck wins by searching out enough mountains and Valakut, the Molten Pinnacle to kill their opponent in one shot. Erik decided to try out some new tech from Khans of Tarkir in his build, using Dig Through Time to help him find his combo pieces that much easier. Will we continue to see new faces rise to the top of our tournaments? Want to see your picture up here too? Come to our Friday Night Magic tournaments at our Transit Road location for your shot to end up here.

Dave and Adam's is one of the largest sellers of trading cards and collectibles in the world. Located just outside of Buffalo NY, the company operates two retail stores as well as the e-commerce website www.dacardworld.com
View all posts by Dave and Adam's Card World →
Getting ready for Flawless Friday at Dave & Adam’s
2014-15 Upper Deck SPx NHL Hockey preview