By Dave and Adam's Card World on October 17, 2014 in Gaming News & New Products, Magic the Gathering

Hello again, and welcome back to Dave and Adam’s Friday Night recap. This week will be a little different. Instead of two new decks, I’m going to give you three. First up we have our Standard winner from October 10th 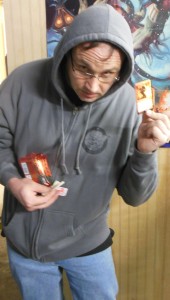 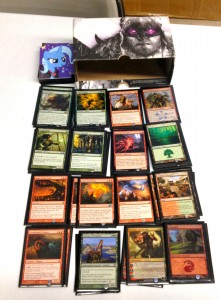 Joe won with a Red/Green midrange deck which featured powerhouses from previous Standard, such as Stormbreath Dragon, Courser of Kruphix and Xenagos, the Reveler, as well as newer value cards such as M15’s Hornet Queen, Hornet Nest and Goblin Rabblemaster. With all of these tokens popping in and out of play, Joe has also included Purphoros, God of the Forge so he can get a free Shock every time one of the little creatures comes into play allowing him to close out the game even faster.

Up next we have Nathan Ohmit and his take on Death and Taxes in Modern: 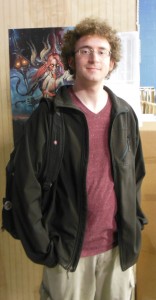 1x Mikokoro, Center of the Sea

3x Spirit of the Labyrinth

1 Sword of Feast and Famine

Nathan’s deck is a port of the popular Legacy deck of the same name. The point of the deck is to play lots of creatures that provide value, whether they provide an extra creature when they come into play like Blade Splicer or attack like Brimaz, King of Oreskos, or they’re just relatively hard to kill, like Epochrasite, all the while making it difficult for your opponent to play his or her spells, using cards like Judge’s Familiar, Thalia, Guardian of Thraben, and even the combination of Leonin Arbiter and Ghost Quarter to create a build-your-own Strip Mine effect. Nathan is also running a tricky combo with his maindeck Spirit of the Labyrinth, by joining it with Mikokoro, Center of the Sea, so that he’s the only one who would be able to draw any cards from it. The deck is low to the ground and difficult to deal with using 1-for-1 removal, making anything short of Supreme Verdict or Anger of the Gods somewhat lackluster. Nathan ended up going 3-1 with his deck this past weekend.

Our Modern winner this past weekend was actually me, and I was playing Naya Zoo:

The deck is very straightforward, with 16 1-drop creatures it wants to be attacking early and often. The burn spells in the deck are more often used as creature removal, clearing the way for your early guys but can also be used to finish of your opponent if they end up at a low enough life total. It may not be a tier 1 deck, but it can easily punish your opponent if they keep a slow opening hand, or if they stumble on lands. Going forward I might shave a land, because flooding out is the worst thing that can happen to the deck and I’d look to retool the sideboard, because I’m not entirely happy with it.

Want to see new decks before they show up here? Come to our Transit road store every Friday night and join one of our three tournaments and you might see your list on here too!

Dave and Adam's is one of the largest sellers of trading cards and collectibles in the world. Located just outside of Buffalo NY, the company operates two retail stores as well as the e-commerce website www.dacardworld.com
View all posts by Dave and Adam's Card World →
2014 Topps Valor Football preview
#DACWPulls: Monster hits from 2013-14 Upper Deck SP Hockey