By Dave and Adam's Card World on May 1, 2015 in Magic the Gathering

Welcome back to another Friday Night Magic recap. We have two new winners this week, so let’s get started with our Standard winner from this week, Austin Blaszak: 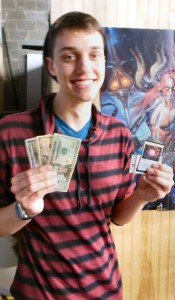 Austin was running a 4-color Whip of Erebos deck. The aim of the deck is to get creatures into your graveyard early and often using Satyr Wayfinder, Sidisi, Brood Tyrant and Tasigur, the Golden Fang, then bring them right back for a turn with the Whip. Austin’s deck looks to go over the top of other creature decks by running the new Dragonlord Atarka. Dealing 5 damage between your opponent’s creatures and 8 damage to your opponent (while gaining 13 life thanks to the lifelink granted by the Whip) can be enough to cause a huge swing in the course of the game. While Atarka does die to Hero’s Downfall, that’s mitigated a bit by potentially wiping your opponent’s side of the field.

Atarka Red is essentially a mono-red deck splashing green and is named after the new card from Dragons of Tarkir, Atarka’s Command. Atarka’s Command is capable of doing large swaths of damage from seemingly nowhere. Being able to curve Foundry Street Denizen into another creature or two into Hordeling Outburst, followed up by an Atarka’s Command, means your opponent can be dead by as early as turn 4. Now, assuming that your opponent doesn’t have a way to interact with your creatures (or block for that matter) in Standard is unlikely, but against decks with lots of comes-into-play-tapped lands this deck is capable of stealing games out of nowhere with its fast creatures and inexpensive burn spells.
Standard is varied place right now, with many different decks doing well on different weekends. If you want to see for yourself what does well next week come do Dave and Adam’s Friday Night Magic every week at our Transit Road location, and coming soon, our new location near the Eastern Hills Mall. 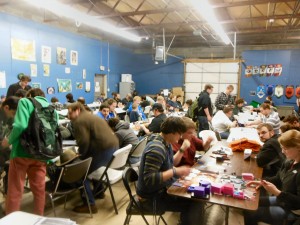 View of the action during Friday Night Magic at our Williamsville, NY retail store.

Dave and Adam's is one of the largest sellers of trading cards and collectibles in the world. Located just outside of Buffalo NY, the company operates two retail stores as well as the e-commerce website www.dacardworld.com
View all posts by Dave and Adam's Card World →
2015-16 Upper Deck O-Pee-Chee Hockey preview
Topps to offer phenomenal cut auto booklets in 2015 Five Star Baseball