By Dave and Adam's Card World on November 4, 2014 in Magic the Gathering

We were very happy to have so many people show up to our Halloween edition of Friday Night Magic. We have two new winners this week, so let’s get started with our Standard winner Cade Ryan: 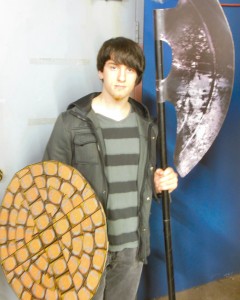 Cade was running Abzan Midrange. Cade’s version seems to be a more controlling route, looking to 1-for-1 trade his removal spells for his opponent’s creatures early, then
come over the top with his 4, 5 and 6-mana spells like Siege Rhino, Wingmate Roc and Elspeth, Sun’s Champion. Duneblast out of his sideboard is especially tricky, especially with a monstrous Fleecemane Lion in play, being able to keep a second creature alive through your sweeper.

Our Modern champion from this past weekend was Ryan Leggio (making one of the goofiest faces we’ve seen here): 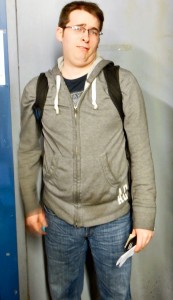 4x Eidolon of the Great Revel

3x Flames of the Blood Hand

Ryan was running what appears to be his own twist on Mono Red Burn. His deck has the standard Goblin Guides, Eidolon of the Great Revel, Lightning Bolt and the like, but eschews the somewhat sketchy Vexing Devil for another 1-drop creature, Figure of Destiny. Figure can come down on turn 1 and give you something to do with your mana early and late, something that burn has trouble with if they draw too many lands. He’s also running Molten Rain in the sideboard which seems rather good in a format where the color fixing of choice is fetchlands into untapped shocklands. Want to see your name, picture and list up here? Want to show off your latest brew? Come to our Transit Road location every Friday night for Buffalo’s largest Friday Night
Magic.

Dave and Adam's is one of the largest sellers of trading cards and collectibles in the world. Located just outside of Buffalo NY, the company operates two retail stores as well as the e-commerce website www.dacardworld.com
View all posts by Dave and Adam's Card World →
Dave & Adam’s buyers hitting the road in two countries this weekend
Upper Deck offers up pieces LeBron James’s high school jersey in 2013-14 Exquisite Basketball