By Dave and Adam's Card World on November 16, 2015 in Magic the Gathering

Hello everyone, and welcome back to the Dave and Adam’s FNM recap. It’s a new week, and that means two new winners. First up, our Standard winner, Mike Turner: 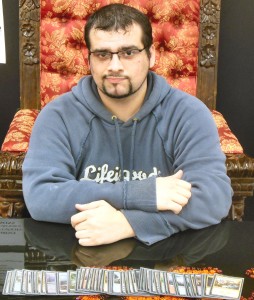 Mike was running Abzan aggro, a deck which has been gaining popularity ever since Dark Jeskai became the consensus “best” deck in the format. Abzan aggro with some of the most efficiently priced creatures in the format with Warden, Anafenza the Foremost and Siege Rhino and close the game out with the inevitability of Hangarback Walker, Gideon, Ally of Zendikar and Sorin, Solemn Visitor. The deck looks very similar to Abzan decks of the previous Standard format, which is hardly surprising, as the best cards of the deck from Khans of Tarkir Block haven’t rotated out yet. Add that to the new fetch-able dual lands from Battle for Zendikar, making the mana far easier and far more flexible, and you have a deck which is well positioned going forward.

Up next we have our Modern winner, Constantine D.:

Constantine went 4-0 with this mostly mono-Green Devotion deck. The deck looks to run a lot of permanents with Green mana symbols in their casting cost and play an early Genesis Wave for a million (roughly). Once the board is bogged down with little green men he plays Craterhoof Behemoth as his finisher giving his army +1 Million/ +1 Million (roughly) and killing the opponent in one shot. Alternatively, the deck can also use Kessig Wolf Run to do the (roughly) million damage the deck is looking to dish out. The deck can also function, somewhat, as a mono-green aggro deck, if for some reason the combo isn’t coming together, with cards like Strangleroot Geist , which conveniently has a double-green casting cost, and Garruk Wildspeaker’s tokens, as well as Kitchen Finks and Obstinate Baloth out of the sideboard

Will we see anything new show up here next week? More wacky combos, more aggro? Who knows! Come to Dave and Adam’s Friday Night Magic every week and find out for yourself!

Dave and Adam's is one of the largest sellers of trading cards and collectibles in the world. Located just outside of Buffalo NY, the company operates two retail stores as well as the e-commerce website www.dacardworld.com
View all posts by Dave and Adam's Card World →
Dave & Adam’s 2015 Black Friday Sale promises to be biggest yet
Dave & Adam’s “Leaders of The Pack” – Week 10