By Dave and Adam's Card World on November 9, 2015 in Magic the Gathering

Welcome back to the FNM recap. It’s been a while since we last met, and a lot has changed in the world of Standard. Rotation has come and gone, taking with it Theros block and Magic 2015, and leaving it its wake Battle For Zendikar. Despite the loss of Thoughtseize in Standard, Abzan appears to be alive and well in Dave and Adam’s Standard event, with Brandon Zadzilka going 4-0 at our recent Cash Night with Green/White/Black midrange:

Abzan Midrange looks to survive until the middling turns, using removal and hard to kill creatures and eventually grind the opponent out of resources. Siege Rhino and Hangarback Walker, the two most ubiquitous creatures of the last Standard format make an appearance here, as well as Tasigur, the Golden Fang, and his ability to further grind resources out of the opponent using his recursion ability. With Abzan doing well at the Pro Tour and at smaller, private tournaments, it should be no surprise that people will stick with the old standby.

Abzan was the deck du jour in our most recent modern event, with our winner Rob Imbs: 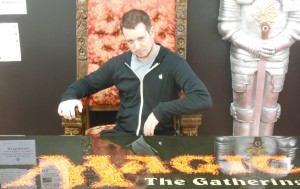 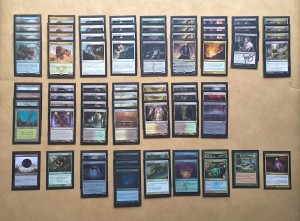 Rob’s deck has the same overall game plan as the Standard list. Efficient 1-for-1 removal, difficult to kill creatures, card advantage, a little recursion and a little incidental life gain are par for the course for this style of deck. To give you an idea of the power level of Standard at the moment, Rob’s Modern list, which has access to cards printed from 8th Edition all the way through Battle for Zendikar, also features Siege Rhino and Tasigur, the Golden Fang. The rhino, a 4/5 which drains your opponent for 3 life when it comes into play, and Tasigur, which can be a 4/5 for as little as 1 mana and can recur your dead creatures or your removal spells over and over are just that good.

Will Abzan reign supreme again next week? Find out for yourself at Friday Night Magic at Dave and Adam’s.

Dave and Adam's is one of the largest sellers of trading cards and collectibles in the world. Located just outside of Buffalo NY, the company operates two retail stores as well as the e-commerce website www.dacardworld.com
View all posts by Dave and Adam's Card World →
Win an autographed Connor McDavid jersey from Dave & Adam’s
Dave & Adam’s “Leaders of The Pack” – Week 9