When Yoan Moncada was introduced at the press conference to announce that he signed with the Boston Red Sox, the team’s general manager, Ben Cherington, referred to him as “one of the few most talented 19-year-olds in the world.”

Moncada is the latest highly touted baseball prospect to come over from Cuba, joining the ranks of Yasiel Puig, Jose Abreu and Jorge Soler. He received a $31.5 million signing bonus when agreed to terms with the Red Sox this past March. 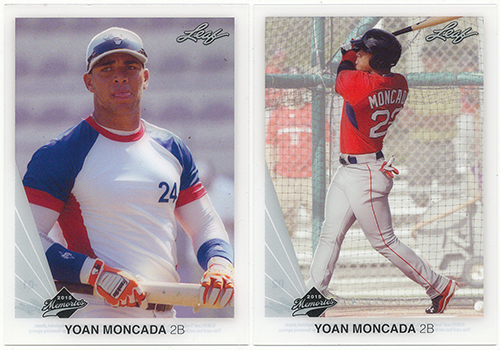 Leaf Trading Cards has produced the first player licensed trading cards of Moncada. It is a special two-card set printed on clear acetate stock. The design was based on the memorable 1990 Leaf trading cards that helped get the brand on the map with collectors. This set will be available soon at DA Cardworld in limited quantities. Don’t miss this chance to own the first cards of baseball’s “next big thing”.

Moncada is currently playing extended spring training in Florida, where he hit a triple in his first at-bat. He will likely wind up in Single-A Greenville (S.C.), where he will make his pro debut.

Dave and Adam's is one of the largest sellers of trading cards and collectibles in the world. Located just outside of Buffalo NY, the company operates two retail stores as well as the e-commerce website www.dacardworld.com
View all posts by Dave and Adam's Card World →
2015 Panini Prestige Football preview
2015 Topps Heritage Minor League Baseball Edition preview