From an official Topps Press Release:

On the heels of Brett Favre’s debut win as Jets quarterback, Topps announce that it has created a follow-up to the much-popular Brett Favre “Tractor Cardâ€ with the quarterback’s ride going all the way to the Big Apple…Times Square, New York City.

Topps has produced another limited edition “Tractor Cardâ€, but this version has Favre driving his tractor under the bright lights of Times Square wearing his New York Jets helmet.  The 2008 Topps Branded card will be exclusively seeded into packs of 2008 Bowman Football (releasing the second week of October). 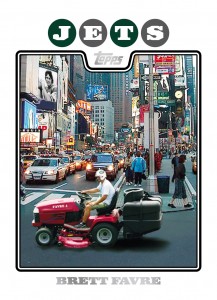 The “Tractor Cardâ€, which appears as a very limited short printed variation in 2008 Topps Football, depicts then-Packer quarterback Brett Favre riding a tractor (one thing he wanted to do in retirement) on Lambeau Field.  The card, which has become an internet sensation, pokes fun at Favre’s ongoing battles with retirement.