Upper Deck has released parody cards of V.P. candidates Joe Biden and Sarah Palin. The cards will be sprinkled into 2008 Upper Deck SP Authentic Baseball, which releases next week.

Upper Deck’s director of Sports Marketing had this to say, “Our goal is always to be timely and topical,. And with so much at stake in this year’s election, we thought it was only fitting that we produce a pair of cards chronicling the vice-presidential candidates to go along with our earlier cards of the presidential candidates.â€ 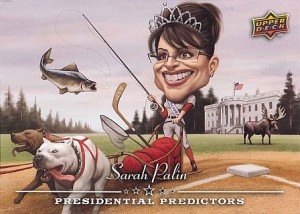 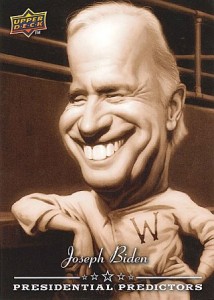 Biden is depicted as longtime Washington Senator’s pitcher Walter Johnson, a seasoned veteran who’s looking for the biggest win of his career. Palin, meanwhile, is shown rounding the bases near the White House in a most unusual manner – atop a dogsled and sporting a tiara – a fitting portrayal for a candidate who’s determined to blaze new trails.
“The caricatures are great,â€ added Stockholm. “We’ve taken some liberties with both of the VP candidates, but we believe collectors will see the cards as entertaining as well as informative.â€
The Palin card certainly has a lot of detail and themes in it.