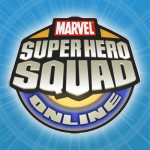 Reward codes can be found in every pack and redeemable in Super Hero Squad Online for exclusive digital rewards like silver or prize wheel tickets. There will be rare loot cards randomly inserted into card packs which can be redeemed in-game for exclusive items like playable characters.

Marvel’s “Super Hero Squadâ€ began as a Hasbro toy line in 2006 where they depicted popular Marvel characters with a cartoon-like style. Marvel created the Super Hero Squad Cartoon series in 2009, and then went digital in 2011 with a massive multi-player online game (MMO) that has taken off with younger Marvel fans. To provide additional connectivity and make the game even more exciting for online users, the TCG is enhanced with exclusive loot cards and reward codes that can be used to unlock exciting features in Marvel Super Hero Squad Online.

Each Booster Box contains 24 packs of 10 random cards. Each pack has 6 common, 3 uncommon and 1 rare foil card. One in every eight booster packs could contain a super-rare rainbow foil card in place of the regular rare card. There will also be Two-Player Intro packs which put the Avengers up against the X-Men, and will include two exclusive play mats and a collectible coin. 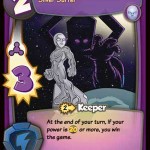 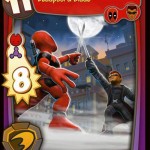 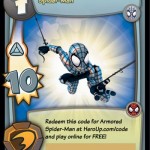 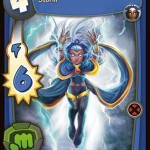