The Winner’s Circle: Born of the Gods Game Day Event! 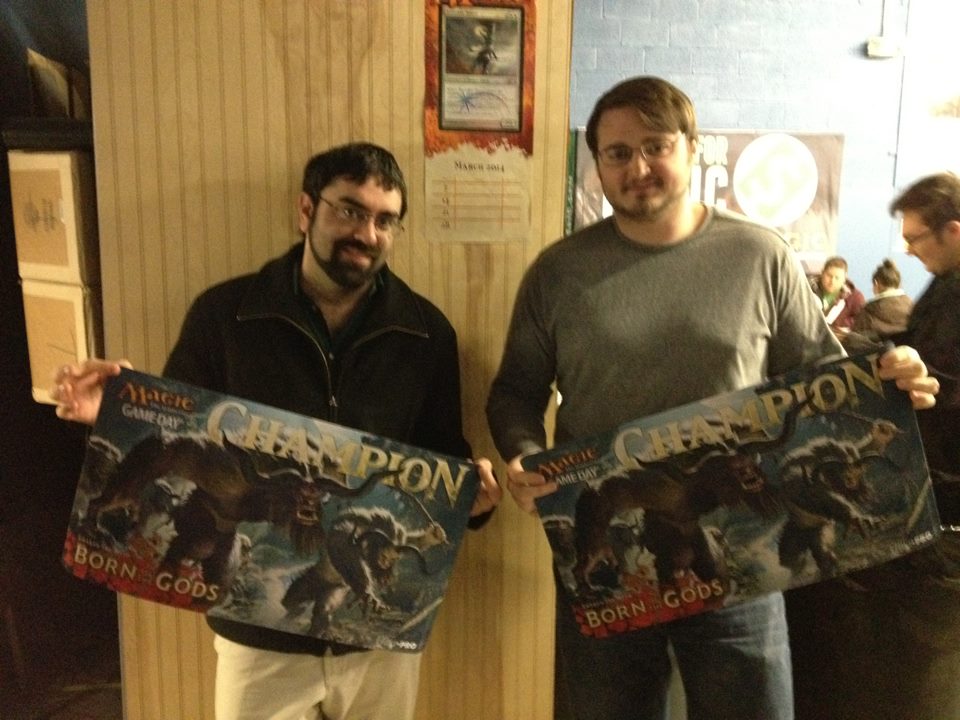 This past Saturday, we had our Born of the Gods Game Day event.  Our 2 champions, Jason Arnold and Peter Bloomingdale agreed to draw the finals of the event, giving them first and second place, so we decided to cover both of their decks in this special edition of The Winners Circle!

Blaine: So you’re running Azorius control, is there anything particularly unique about any of your card choices?

Jason: Not much is terribly unique… control is always very limited on what can be even remotely effective, so many decks look very similar… I’ve never seen “Fated Retribution” played before, and I can honestly say that I was never disappointed when I drew it… Side Board Nullify did a lot more work than I had anticipated it would, as it can counter not only pesky creatures/gods, but also bestowed auras as well as good cards like underworld connections.

Blaine:  OK, so what are some good and bad match-ups for your deck?

Jason:  Good matchups are pretty much anything that is creature based. If your objective is to play guys and turn them sideways, you’re not going to have a very fun time against this deck. As far as bad match-ups go, I’d say that my most difficult match was against mono-black devotion. Their ability to gain a lot of life and do a lot of damage without having creatures on board (combined with their ability to draw extra cards) makes that deck a moderately challenging opponent.

Blaine: Did you face any of these match-ups on day?

Blaine: What were some reasons for and against your choosing this deck:

Jason:
Reasons FOR: It beats creature based decks almost always.
Reasons AGAINST: If you’re not a good player, you will make mistakes that cost you the game almost always.

Blaine: And lastly, do you prefer Standard or Modern and why?

I hate to say that standard seems too “easy”, but the majority of standard decks don’t require the thought that the more intricate modern decks require. MOST of the top standard decks are based on playing creatures that are difficult for your opponent to deal with, and attacking with them. Modern opens the door to many different strategies. I have always been a combo player at heart, and unfortunately playing a combo deck in standard just hasn’t been a possibility in a very long time.

Blaine: Ok, so you’re playing RG Monsters. What made you choose the deck?

Peter: I picked it because it is currently one of the strongest decks in standard and I wanted to win a pain seer promo lol.

Blaine: Ok, so what are your best and worst match-ups?

Peter: I would say the hardest match ups are U/W control and the mirror match. U/W control is usually a loss game one, but post board it’s a pretty even match. This deck does pretty well versus both monoblack/monoblue.

Blaine: What is the best card in your deck?

Peter: Basic Mountain! But seriously, it is hard to pick a best card. They all just work so well together. I would say the best card in the deck would be Domri Rade. Without Domri, the deck would just be mediocre.

Blaine: Yeah, Domri is pretty insane right now! Lastly, do you prefer standard or modern and why?

Peter: I prefer standard, but maybe it is just because I haven’t gotten into modern as much. The extremely high cost of the modern mana base as well as some modern staples really deters me from getting into modern.

Well it was an action packed weekend for us at Dave and Adams and this is just the start! We have a ton of other great events this month all ending up with our PTQ on March 29th!! Don’t wait…you can register NOW!

Dave and Adam's is one of the largest sellers of trading cards and collectibles in the world. Located just outside of Buffalo NY, the company operates two retail stores as well as the e-commerce website www.dacardworld.com
View all posts by Dave and Adam's Card World →
#DACWPulls – Big Hits from February!
DACW Buying Team Travel Update: Off to Richmond, VA and Sacramento, CA.