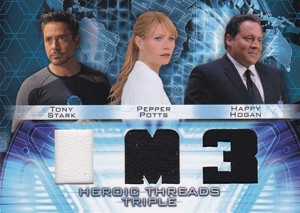 After raking in almost $200 million overseas in its opening weekend at the international box office, Iron Man 3 is poised to be a massive Hollywood blockbuster. An increasingly hobby rarity, collectors have the chance to relive a film at the time of its theatrical release. 2013 Upper Deck Iron Man 3 trading cards aren’t like the abundant sets that came out in the 1970s and 1980s like the original Star Wars trilogy, E.T. and Harry and the Hendersons. Rather, it’s a release that’s loaded with premium content like sketch cards, autographs and costume cards.

Every Upper Deck Iron Man 3 hobby box has three hits. Two are costume cards that include swatches used in the making of the film. There are 50 different Heroic Threads cards. The majority feature more than one costume piece, mixing and matching up to four different characters. Just 11 of the cards have a single character. Early sales are showing strong premiums for a handful of the cards that some are speculating to be short prints. Upper Deck has not confirmed any such short prints at this time, though. Two that are proving to be in high demand, no matter the print run, are autographed Heroic Threads cards from Rebecca Hall and Jon Favreau.

The third hit in the majority of boxes is a sketch card. As with past Iron Man movie sets, these are cards do not line up with the films. They’re based in the Iron Man comic instead, which often leads to a broad mix of characters. Nearly 70 different artists worked on the set. Collectors will notice that the majority of sketch cards are in full-color.

Autographs are inserted about every third box. While Robert Downey Jr, Gwyneth Paltrow, Ben Kingsley and Don Cheadle do not have signatures, the Actor Autographs checklist does have some solid names. Favreau and Hall both have regular autographs in addition to autographed costume cards. In fact, Favreau, who also directed the first two Iron Man films, has two different regular autographs. Other signers include William Sadler and Iron Man 3 director Shane Black.

Expanding on the history of the character are Comic Autographs. The legendary Stan Lee, Kurt Busiek and Bob Layton are among those with signatures.

Hall of Armor is an acetate set that showcases the many different spins the Iron Man costume has had over the years. Finally, there is an Extremis parallel that covers the base set.

Worth noting is that some collectors are reporting they’ve landed Upper Deck Iron Man 3 hot boxes with either 24 costume cards or 24 Hall of Armor cards. These could be pleasant mistakes or they could be a calculated bonus. Either way, it’s something to look for but probably not to chase.

Dave and Adam's is one of the largest sellers of trading cards and collectibles in the world. Located just outside of Buffalo NY, the company operates two retail stores as well as the e-commerce website www.dacardworld.com
View all posts by Dave and Adam's Card World →
Eli Manning Football Card Collection Purchased
#DACWPulls – Big Hits from the Past Week!