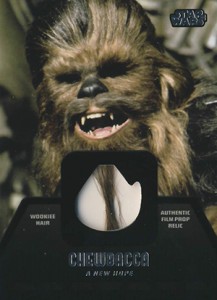 When it was first announced several months ago, Topps Star Wars Jedi Legacy created a lot of buzz. Despite more than 35 years worth of sets to draw from, it managed to deliver a couple of big franchise firsts. But now that the product is finally out and collectors can pour over the checklist, there’s even more to get excited about.

The big new chase is the inclusion of relics. This is the first time collectors have had a chance to pull cards featuring pieces of memorabilia that were used in the filming of the original trilogy. The original announcement mentioned Jedi Legacy would have pieces of Ewok fur, Chewbacca hair and Jabba the Hutt’s sail barge. That’s all true, but it seemed as though there might be only three relic cards to chase. Even though some are rare, it wouldn’t take long for die-hard fans to get all three and simply move on. The final checklist still uses only the three relic groupings, but each has several variations. There are eight different Ewok cards, four with Chewbacca and five different cards with sail swatches. This gives collectors much more variety and options. It also means that the market isn’t flooded with many of the same cards. 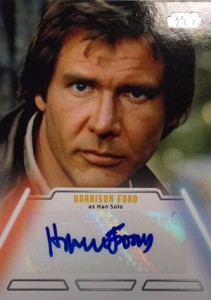 Another area of Topps Star Wars Jedi Legacy that is even more impressive than originally thought is the autographs. Originally collectors were promised Mark Hamill (Luke Skywalker) and Carrie Fisher (Princess Leia). Certainly both are big names, but they’ve also had their share of cards in the last decade. In the end, 15 costars ended up joining the Force-wielding siblings. Among them are James Earl Jones (voice of Darth Vader), Ian McDiarmid (the Emperor), Anthony Daniels (C-3PO), Kenny Baker (R2-D2) and Billy Dee Williams (Lando Calrissian). And Harrison Ford. Harrison Ford. And we didn’t know about this ahead of time. Not only is Ford a modern Hollywood legend, but he is also a tough signature to get. He’s loosened up a little in recent years, but his autograph cards are still far from cheap. The first Star Wars Jedi Legacy Harrison Ford listed on eBay sold quickly for $3499.99.

Up next for Star Wars card collectors is Galactic Files 2, which is slated for release this summer. Like Jedi Legacy, the checklist is being largely kept under wraps for now but the product does have the first-ever Star Wars dual autographs.

Dave and Adam's is one of the largest sellers of trading cards and collectibles in the world. Located just outside of Buffalo NY, the company operates two retail stores as well as the e-commerce website www.dacardworld.com
View all posts by Dave and Adam's Card World →
The DACW Buying Team Road Schedule: Philadelphia and Denver This Week!
Steve’s Buys: A Mix of “Junk Wax” and 1990’s Treasures