Blog Homepage \ Gaming News & New Products \ The Day I learned how to play Magic The Gathering.

The Day I learned how to play Magic The Gathering.

A day that will surely live in infamy.

Two things crossed my mind when I received a text from Dave & Adam’s gaming product manager on my way home from work last Friday. The first being why I even gave the gaming product manager my number in the first place and the second being why I even told him I had an interest in learning how to play Magic The Gathering. I didn’t have his number saved in my phone but I could tell it was him since the text stated he was having a Magic draft at his place. The awkwardness must of kicked in after he sent it because a second text followed stating who he was along with a repeat of the previous information his last text provided.

He caught me on a good day, I literally had nothing to do other than go home and stare into the television like a junkie. I thought of excuses to blow it off and try for another day but I honestly could not find one worth wasting on the guy, so I agreed to come by and take a shot at learning a game I always, up until now, laughed at people for playing. Plus the gaming product manager seemed like a cool enough guy to be around. He is witty, shows signs of intelligence and his last name is a color. I only wish that color was one used in Magic The Gathering so I can name my Mana pool after him. (Oh no, it’s happening. What am I becoming?) On top of all that he drank the same type of beer as me, so if the whole Magic lesson didn’t work out and I ended up flipping the table over, we could take a 12 pack down and talk about work, or at least make this visit as less awkward as possible.

In true Card Guy Andy fashion, I was the first of ten expected guests to arrive and was immediately taken with the set up of this guys apartment. Think Pee Wee’s Playhouse mixed with the place Edward Scissor Hands lived in before Peg brought him to live in her house, it was that cool. Some of the coolest posters and artwork on the walls, an umbrella rack of Samurai swords and other blunt objects of fantasy and a huge projection screen which I thought was going to be used to give me a tutorial on the game, but really was just used as a video game screen. Not to be outdone however were stacks upon stacks of Magic cards and enough dice to choke a horse. Everywhere you looked there were Magic cards and dice – EVERYWHERE! I didn’t believe the guy when he said they weren’t all his, but as the others started showing up with arm fulls of booze and decks of Magic cards I put it all together and figured those endless stacks were simply left behind at some point.

So the entire point of me arriving early was to get the basics of the game down before his crew showed up for the draft, and I took it seriously. As he began explaining the different types of decks and what lands did and how you have to un-tap your played cards before you played your turn I took it all in and surprisingly retained it, asking questions along the way of course. Some things I had a hard time understanding but my questions took care of those quickly. He explained things so well that I decided to try a game, because in my opinion the best of way learning something is to do it, the old hands on routine. I was playing with a deck that was already made and was just going by what it said on the card, learning as I go. I quickly learned that you would want ‘Creatures’ that cost very little to play so you can put attackers out quickly as well as an ‘Enchantment’ or two that can bond  creatures together in order to really mess up your opponents day. I learned that an ‘Instant’ really means you can play it instantly and can be a very good tool in your deck. I was rolling, still asking way too many questions a normal man could handle but all were answered and it made things a lot easier. I got to the point where I had three high damage giving creatures that my opponent was unable to block, so for three consecutive turns I would swing with all three, hoping he didn’t have anything to counter with. Turns out he didn’t and I won my very first game of Magic The Gathering.

I won’t lie to you, I felt like the biggest dork in the world. I could feel the eyes and condemning hand gestures of my friends fixed on the back of my head from the front window, laughing ’till their heads fall off. I was horrified that I was suddenly cast into a Truman Show-esq type of scenario and the whole process of me learning the game saying things like ‘I attack with Goldnight Redeemer with flying’ were being broadcast to the whole world of people pounding their fists on the bar with laughter, watching another cool soul be pulled into the geek abyss. I was mortified. The truth though – I was really happy. I couldn’t help but smile as I shook the hand of my teacher/opponent and I looked forward to drafting with the other members of the crew.

I felt really comfortable, it was a cool spot to chill in. It was like a co-op for hippies only without the patchouli smell and where everyone is respectable of each others quirks. I started to let my guard down and began telling them things I normally wouldn’t tell others, stuff my good friends don’t even know. Like how I keep lifetime stats for every player (even punters) for Super Tecmo Bowl, a game for the original Nintendo Entertainment System – BY HAND!  And how I have a  collection of Muppet Show episodes that I watch religiously and know all the songs by heart. It’s ok to laugh – I even think it’s dorky.

Draft Time! Everyone was ready with their three packs of Avacyn Restored and ready to rip them open. The concept of it was to open your pack, take the card you covet the most or one that will be useful to you in building your deck then pass the remaining cards to the left, allowing the next person to explore the pack. The process repeats until the last card is left, then you open another pack and do the same thing – easy enough. I decided I was going to do a white/blue deck, based on the information that I could gather from the other members of the draft, those were the ones that worked well together.

First pack – I happen to pull a Mythic Rare. More importantly the card that the whole set is built around – Avacyn, Angel of Hope. 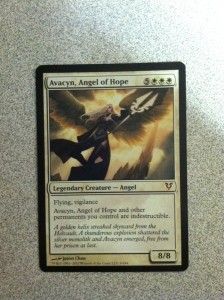 I have to admit, it was just as exciting as pulling a big hit out of a box of hockey cards. The monetary value isn’t really there, but the gaming value and what this card can do for your deck is second to none. Based on the input from my newly found friends, the card is basically indestructible and when it gets put into the battlefield, it is game over for your opponent. I am sure after a few more weeks of practice, I’ll find out just how indestructible this thing is since everyone knows I have it and will be designing their decks to stop this legendary creature.

After the draft we all paired off and did battle, not for money or even cards but just for the fun of it. I got totally creamed in all three games I played, but still pulled off some pretty good moves. The one I was most proud of was playing back-to-back Angel of Mercy instants to bring me back to 20 life when my opponent hit me with a massive flying attack. 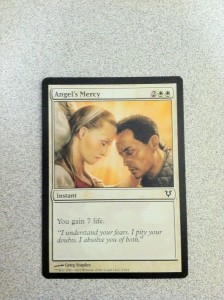 After a couple beat downs in Magic The Gathering, a few beers and some of the greasiest pizza I ever had I decided that my share of gaming for the night was over. I gathered my stack of cards and my phone and went to bid farewell to the gracious host. I could tell by the way he said goodbye that he didn’t think I would be back and that I had enough with the experience. When he asked what I thought however, he was taken back by the fact that I said I would be returning for more drafts and was still interested in learning more about the game. Upon returning home, I put the stack of Magic cards on my dresser, as my host said I would, and went to sleep. My last thought being how I could miss soul-bonding my two creatures I had control of  in order to block the final attack that sent me to the streets of Buffalo, hoping not to find my windshield bashed in upon finding my car.

The next morning I woke up to a text from my Magic teacher, saying that the upstairs neighbor that popped in to say Hello earlier in the night wanted me to have her phone number. I am pretty sure I am the first person the the history of Magic drafts able to obtain a phone number of the opposite sex, or at least be truthful about it. I laughed and thanked him for his hospitality and asked him to keep me informed about the next one.

The truth about it is, playing Magic would not be the main reason I am going to go to the next draft. I look more forward to the people. The unabashed laughter at each others intelligently planned comments and jokes, the awkward eye contact after saying something so dorky you almost feel ashamed you did, and the safe haven where my quirks aren’t laughed at but only shared by others.

It was a fun night and even a more fun story to tell. I am richer for having met those people that night, and if I become a better Magic player out of it, I consider it only secondary to the new friends I made.

June ‘Hit of the Month’ Prospect Entry #10 – Case Hit for Landin!!
Leaf Metal MMA Set is a Knock Out!!

2 Responses to The Day I learned how to play Magic The Gathering.