By Dave and Adam's Card World on January 3, 2013 in Gaming News & New Products

It’s the most wonderful time of the year.

I’ll confess I like the month leading up to a new release of Magic almost more then when the actual set drops. Sometimes, it can be hard to even know what to talk about. I could write a whole article just on the Cipher mechanic coupled with Invisible Stalker and not even need to get into Lazav. Can you tell I’m excited for the Guild-That-Shall-Not-Be-Named?

With the anticipation building and spoilers seemingly dropping out of the sky, I thought it would be nice to check out those keywords we got before the first of the year. 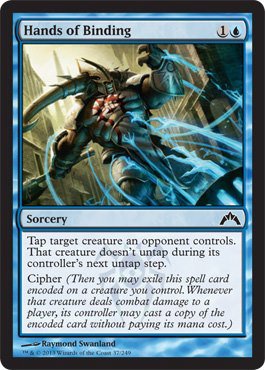 Okay, I’m just going to get this one out of the way. I love this mechanic. One of my Friday Night Magic players put it best, “Haunt done right.” While the Ozhov might balk at the comparison there is no denying that this is going to be a great mechanic. It does mean you need to safe guard the creature it’s encoded to so you better keep a counter handy, but an unblockable hexproof creature like Invisible Stalker coupled with Hands of Binding will change the dynamic of the board in a big way. Needless to say I expect to see this coming up during Standard tournament a lot.

Does it automatically win you the game? No.

Will it screw up your opponent’s plans? Definitely.

Having already put a lot of time and effort into an Izzet League deck, I’m keen to marry the two Guilds together in a tri-color deck or at least see how Dimir benefits from some of those blue spells. 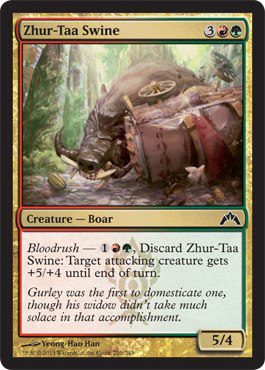 My very first Magic deck was an Elf + Fireball deck. One of the best parts about playing that deck wasn’t burning creatures and players with massively fueled Fireballs, it was having that one Green Mana open when I sent a little Elf at a 3/3. I wonder if my opponents felt they could see the reflection of Gigantic Growth in my eyes.

This leads me to Bloodrush.

With a mechanic like Bloodrush, all the cards are in the hands of the Gruul player. No pun intended. It’s all a matter how much mana the player has untapped and whether or not you want to play chicken.

I also like this mechanic because it gives you something to do with those big creatures that you might not see yourself as getting enough mana to play. Still, it’s a heavy cost and I expect a few matches to end with a player who over-estimated their ability to survive kicking themselves.

Much like Cipher you’re going to want to make sure you have the little creatures to help make this work if you plan on going Gruul in a Limited environment.

Only time will tell. 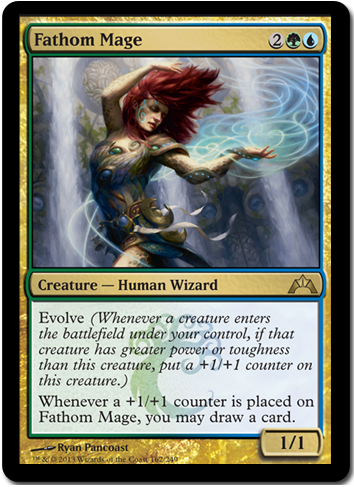 Oh for the love of counters!

While Bloodrush might dictate the pace of the game, Evolve dictates the order of the cards. You’re going to want to be very careful with your choices if you go Simic at a pre-release, but if you think you have it in you this mechanic will make your creatures an rolling wave of destruction.

Take advantage of Green’s ability to ramp and always put down more mana then you need. 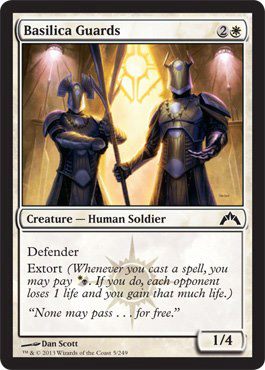 Do you remember a kid, maybe at a family gathering, that wouldn’t stop kicking your leg? It didn’t hurt at first, but sooner or later you yelled at him to stop. Everyone looked at you weird. No? Just me?

Well, let’s pretend for a second. What happened there? Simple. The kid wore you down.

I’ll admit, the Ozhov aren’t coming out of the gate with the big badness of the Gruul, but that’s not their style. Instead, they’re going to sit you down and just take a little from you at a time until suddenly you realize all of your money and your pants are sitting on their side of the table. 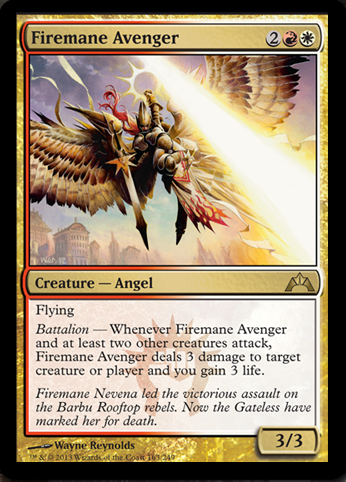 As is evidenced by the Ozhov mechanic, I have a lot of love for keywords that fit with the theme of a Guild. In regards to Battalion, I love the feel of it more then I initially liked the mechanic itself.

Boros is an army. Armies gain their strength from fighting alongside each other. There is no doubt that to gain the full benefits of Battalion you’re going to need (at least right now) to look outside the set in Constructed. Token generation will be key, but don’t discount the game ending power of multiple creatures with Battalion taking an alpha strike swing at an opponent. When an army decides to charge, the smart money says to run for the hills. You might even like to have a Master Tactician in your army. Don’t worry, I know a guy.

(See what you did there Wizards…)

Ultimately, and perhaps one of the best parts of Magic the Gathering, is that you’re going to play to your strengths and your personality, the Guilds are just along for the ride. Game on.

Dave and Adam's is one of the largest sellers of trading cards and collectibles in the world. Located just outside of Buffalo NY, the company operates two retail stores as well as the e-commerce website www.dacardworld.com
View all posts by Dave and Adam's Card World →
Why Entertainment and Non-Sport Cards Will Grow in 2013
Phenomenal Pulls: Big Hits from the Past Week