By Dave and Adam's Card World on February 22, 2013 in Gaming News & New Products

One of the most wonderful things about Magic the Gathering is that there’s always something new. Never has this been more apparent then in the past two pre-release events. Pretty much universally well received, the Guild Pack method of distributing the cards let players come into the game with a strategy, or at least a theme, already in their mind. It was interesting to see what Guild would be most picked and what Guild would be the most successful.

Now, with the Dragon’s Maze, all ten Guild have been introduced so it’s time to decide your favorite. All ten Guilds will be available and they will have their respective pack of Guild cards, but now is the time to splash a third color with a special “Ally Guild” pack. I’m personally hoping to marry together Dimir and Orzhov into a lovely Esper deck that will make the best use of Cipher and Extort.

With this pre-release, we return to a single foil promo for all participants instead of the Guild specific rare. I can’t say I’m happy about that. Wizard’s spoiled me on the previous events. Also, much in the style of Avacyn Restored’s Helvault, this event will feature an actual Maze that the different Guilds will move through. When the end is reached prizes will be unveiled with the winning Guild getting special prizes. Now, no one I’ve talked to really got into the Helvault scenario at AVR’s pre-release, but I think this will be different. The Helvault just seemed to be a time delaying technique and in the end opening it was awkward instead of epic. Here we throw a competitive edge into the mix and some real benefits for being the first to the end of the Maze. 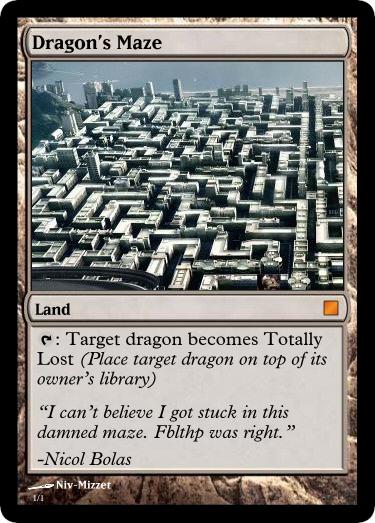 Pretty sure it won’t be this maze

Finally, we get to the packs themselves. Wizard’s has promised there will be no basic lands in Gatecrash packs and instead you will have either a Guildgate, a Shockland, or an as yet unconfirmed Mythic Rare land. Many whispers are running around the mill about it being the Dragon’s Maze itself and having a win condition that could be achieved by controlling all the Guildgates. However, I try to stay away from speculation. If it is true it’s an interesting card from a flavour perspective, but not really a gameplay one. What is really interesting to speculate on is how the addition of Shocklands to the basic slot will effect the value on the secondary market? The Gatecrash Shocklands are currently going for $15-$20, but if they become a lot easier to find I think you’re likely to see that price go down, but their usefulness will keep them from dipping into the single digits.

I’m anxious to see what Alexis Janson does with the lead on this release since she’s been primarily focused on Magic Online. Perhaps Ral Zarek (who premiered as a character in Duel of the Planeswalkers and is featured in the promotional art for Dragon’s Maze) will follow Alexis as a Planeswalker over from the digital to the cardboard. Only time will tell.

Pre-Order Dragon’s Maze Booster Boxes, or check out our entire selection of Magic the Gathering Cards.

Dave and Adam's is one of the largest sellers of trading cards and collectibles in the world. Located just outside of Buffalo NY, the company operates two retail stores as well as the e-commerce website www.dacardworld.com
View all posts by Dave and Adam's Card World →
What Is The Best Card You Ever Pulled?
#DACWPulls: Big Hits from the Past Week!