By Dave and Adam's Card World on July 8, 2016 in Gaming News & New Products, Magic the Gathering 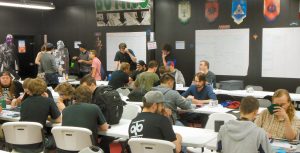 Hello everyone and welcome back to the FNM recap. It’s a new week and that means new winners. Our list this week is from Modern is Christopher Tjahjadi-Lopez, who went 4-0 running Death’s Shadow Zoo:

If you like cracking fetchlands and paying the life to have your shocklands come into play untapped, this is the deck for you. One of the main focuses of the deck is to make the namesake card, Death’s Shadow as big as possible as quickly as possible. Using cards like fetchlands, shocklands, Gitaxian Probe, Mutagenic Growth, Thoughtseize, Street Wraith and even Apostle’s Blessing, the deck can make the -13/-13 huge quickly and put its pilot at astonishingly low life totals as equally quickly. The deck can even “combo out” using Become Immense and Temur Battle Rage. Even when the deck doesn’t have Death’s Shadow online, it can make due with traditional Zoo creatures such as Wild Nacatl, Steppe Lynx and Monastery Swiftspear.

This deck looks to prey on decks with little interaction. On the other side, due to its dependence on creatures to get the job done, the deck tends to be weak against U/W/x control decks, G/B/x decks such as Jund and Abzan, and tends to be very soft to Burn decks, due to the extreme disregard the deck has for its own life total. If you’re expecting a lot of those decks at your next big event, you may want to consider something else.

As you all may or may not be aware, we are most of the way through preview season for Eldritch Moon, and lots of sweet new cards have been previewed. One of my favorites so far has to be the newest incarnation of Tamiyo: Tamiyo, Field Researcher. 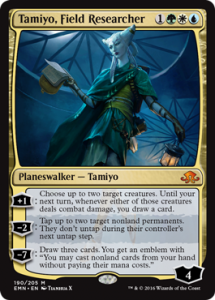 The original Tamiyo was an extremely good Planeswalker, and this one looks to be very good as well. There seem like there could be multiple uses of the powerful Moonfolk across several formats. The first deck that jumps to mind, which also conveniently happens to be my current favorite deck, is Modern Bant Eldrazi. Her +1 ability is exactly what the deck needs most: a way to draw more cards once you’ve played out your hand. The -2 ability seems like it would be very effective at breaking board stalls in grindy matchups or even keeping you alive if your opponent happens to have a slightly faster clock than you do.

The only downside I see to the new Bant Planeswalker is just how color intensive she is. While the deck has no problem getting Green, White and Blue Mana available by as early as turn 3, it’s going to be very painful. With fetches, shocklands and painlands you can end up doing 4 or more damage to yourself before she comes online and at that point, I don’t know if the deck would prefer Elspeth, Knight Errant instead to play a similar role at an easier Mana cost.

Do you have any other interesting homes for the new Tamiyo? Any other sweet brews with anything from the new set? Let us know! We want to hear from you!