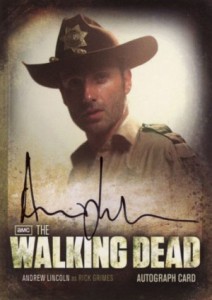 How do you follow up a set that triples in price in the first couple of months? Rarely in this hobby can lightning strike twice with the same brand in consecutive years. That could be changing very quickly with Cryptozoic’s set based on the second season of the zombie hit, The Walking Dead.

About a month away from release, box prices are already skyrocketing. And justifiably so. 2012 Cryptozoic The Walking Dead Season 2 keeps the same general configuration of two costume cards and an autograph in every box. The hugely popular sketch cards remain a case hit. Basic inserts are a little more plentiful with a third set added to the lineup.

Amazingly, the second season autograph checklist is significantly stronger than the wildly popular debut set. Nearly all of the main cast are confirmed signers, including three big names who didn’t sign for the first set. Leading them all is Andrew Lincoln, who stars as Rick Grimes, the show’s central character. Joining him is Lincoln’s on-screen wife, Sarah Wayne Callies (Lori). The actress also had a central role on the FOX hit, Prison Break.

Laurie Holden, who was widely predicted as the missing signer from the first set’s checklist (there’s a gap in the checklist), is on board for the Season 2 set. Not only is Holden signing for the new autograph design, but she’s also got a pair of signature cards with the Season 1 design.

It’s rare that a trading card set captures such a complete list of signers. This alone makes the set stronger that the first one and worthy of your attention. 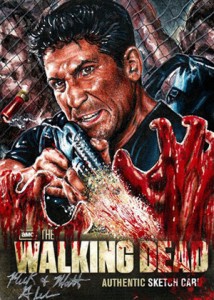 For the most part, the most valuable cards from The Walking Dead Season 1 are the sketch cards. Inserted just one per case, they balance rarity and quality. All were done in color with lots of details. Collectors can expect a similar level of quality without an increase in quantity.

2012 Cryptozoic The Walking Dead Season 2 has already soared past $100 per box. By the time the set’s out, it’s not unreasonable to think they’ll be on par with Season 1 boxes. Over time, with the strength of the autographs, this could be the more valuable of the two releases.

For those Walking Dead fans looking for more of a bargain, 2012 Cryptzoic The Walking Dead Comic Book set is significantly cheaper. Although it doesn’t have much in the way of autographs and no costume cards, every box does promise a sketch card. Box prices are about half that of the first season set.

2012 Cryptozoic The Walking Dead Season 2 is scheduled for release later in the fall.

Dave and Adam's is one of the largest sellers of trading cards and collectibles in the world. Located just outside of Buffalo NY, the company operates two retail stores as well as the e-commerce website www.dacardworld.com
View all posts by Dave and Adam's Card World →
A Big Week for Buying Vintage Cards
Phenomenal Pull: Robert Griffin III Autographed Rookie Card plus more!