By Dave and Adam's Card World on January 24, 2012 in Favorites, Sports Card News and New Products

When I talk about the card collecting hobby I like to share some of the mistakes I’ve made because they tend to be more interesting stories. Let me tell you about one of the bigger ones.

Years ago I would frequently visit a card shop in Niagara Falls to “get my fix” of cards. I liked this store because it carried a lot of oddball items and there was always something new to see.

Back in the late 1980’s there wasn’t a basketball price guide. Why would there be? Everyone collected just baseball cards, right? I walk in one day and they had just opened a case of 1986/87 Fleer basketball to make sets. Why would they waste their time on a product that nobody cared about? Wouldn’t it make more sense to spend the money that they paid for the case to fill the store with Gregg Jefferies rookies? 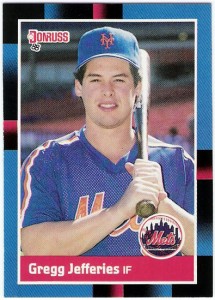 I remember the store owner telling me I should buy a set because this Jordan card will be worth a lot of money some day. How could a basketball card be of any interest to anyone? This shop had a stack of Gretzky rookies for $25.00 each and no one was buying those, I figured they would be stuck with the Jordan cards too. I passed on the set because the $12.00 (with the stickers) just seemed ridiculous to me. Where did he come up with this price?

The following week I went back to the store and the store owner was again trying to convince me that this is a set I should buy. There had to be around 40 of them sealed in plastic, stacked on the counter in a huge pyramid display. Obviously I was right, nobody wanted these sets.

Another week passed. I returned again and saw the display exactly as it was the last time I was there. It didn’t look like a single set sold. For some reason that day, I decided to waste $12.00 on one of the sets. I picked one up and said “I’ll take it. The store owner replied with “The sets are $20.00, now I get $12.00 for the Jordan alone.” 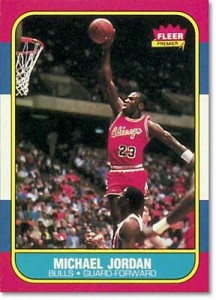 I have bought and sold many Jordan rookies and 1986 Fleer sets since that day but I have never had one in my personal collection.  Anyone interested in some Steve Avery rookies?