From an Official Donruss Press Release :

Donruss today announced that a Brett Favre New York Jets trading card will appear in the company’s Playoff Absolute Memorabilia product, scheduled to reach retail stores the first week of September – some 20-days after Favre was dealt from the Packers to the NY Jets. The Favre card features a photo of the legendary signal-caller holding up his #4 NY Jets jersey at Thursday’s press conference. Donruss dispatched a photographer to the event with the express purpose of creating this special card.

Since the production for Playoff Absolute Memorabilia was in its final stages, the Favre card will be exclusively available in retail boxes which are sold at such leading retailers as Target, Wal-Mart, and other local supermarkets and drug stores. The boxes being shipped to hobby shops have already been packed out and are ready for distribution. 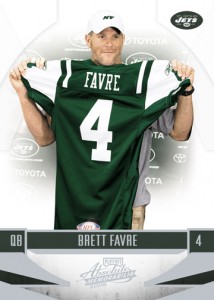 He’s leaving the small town for the big city. It’s official: Brett Favre is the newest member of the New York Jets. The only question now is how long will Jets fans have to wait to get trading cards of their soon-to-be Hall-of-Fame quarterback? Upper Deck is pleased to announce that collectors will not have to wait long at all.

The trading card giant had been planning for weeks the possible scenarios that would cause Favre to leave Green Bay’s Lambeau Field. His first official New York Jets cards can be found in 2008 NFL SP Rookie Edition due out in November, but collectors will have an opportunity to find Jets insert cards of the gridiron legend much earlier.

In 2008 NFL Icons, which is set to release later this month, Upper Deck has inserted limited-edition exchange cards for “Immortal Lettermanâ€ inserts. These manufactured letter patches will spell out “Broadway Brettâ€ if collectors are able to put together the entire set. Since Favre was best known as a Packer, Upper Deck will still produce cards of him dawning Green Bay’s colors. The majority of those cards will focus on the many achievements he had as a member of the Packers. 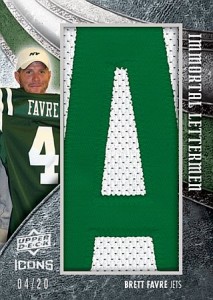 NFL Football is Here, and So Are the Cards
1935 National Chicle Football Cards Acquired