News and Notes From Around the Sports Card World

The always popular SP Authentic Football is now on the minds of many football card collectors as Upper Deck released preliminary images for the product on its facebook page. This extremely sharp looking Mark Sanchez 1/1 was just one of the initial designs. 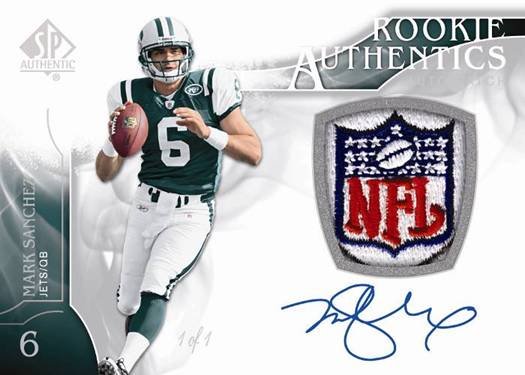 Panini has released preliminary information for their upcoming 2009 Prestige Basketball. Included in the product will be autographed rookie cards of #1 pick Blake Griffin.

In the Game Released 1972: The Year in Hockey. The product delivers on great looking base cards and collectors can also find cut signature cards commemorating 1972 -The Year in Sports, Music, Television, Movies, and Politics.

From a new product perspective, its a big week for Topps Chrome Football. This product just released and is on fire. Next week look for Bowman Chrome Baseball and Upper Deck Goodwin Champions Baseball to make a big splash.

Dave and Adam's is one of the largest sellers of trading cards and collectibles in the world. Located just outside of Buffalo NY, the company operates two retail stores as well as the e-commerce website www.dacardworld.com
View all posts by Dave and Adam's Card World →
Top 5 Hottest Sports Cards Boxes, September 2009
From the Vintage Division: Baseball Card Sets – Michigan Deal