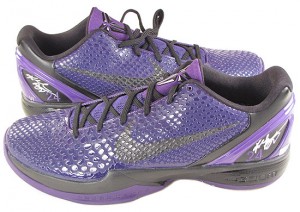 Panini Authentic, the high-end autographed memorabilia division of Panini America, donated this rare pair of autographed Kobe Bryant shoes as the headline item in the annual 2012 Industry Summit Silent Auction and Dave & Adam’s came away the winner!  Now Dave & Adam’s is using them as a giveaway as well!

The extremely rare Nike ID Zoom VI shoes utilize a design created exclusively for Bryant through the Make-A-Wish Foundation. Bryant wore one pair of the shoes on March 8, 2011, while scoring 26 points in a 101-87 victory over the Atlanta Hawks. Although the shoes that were donated to the Industry Summit Silent Auction weren’t worn in a game, both shoes are autographed by Bryant and carry an approximate value of between $1,500 and $2,000 according to Panini Authentic’s Brian Bayne.

Here are the contest details:

Random winner will be selected on approximately May 13th, 2012.