A strong start to any event ensures success and with Hockey Hall of Famer Phil Esposito stopping by our Transit retail location last night for our first Week of Stars event of 2012, we certainly set the tone for the rest of the week.

Normally, the fans try to engage the athlete by asking questions about their career. Upon seeing some of the items the fans brought to sign, Phil would immediately begin talking about the item or telling a story about what was going on in the picture.

Last year we had his brother, Hall of Fame goaltender Tony Esposito in for an autograph signing. So naturally there was a lot of pictures with the brothers on it with Tony’s autograph awaiting Phil’s for completion. Each time Tony saw a photo with his brother on it he would joke about how Tony always takes up all of the room on the photo, leaving him no room to sign. Or how he should sign the photo ‘right across his stupid goalie mask’.

One young fan asked Phil if he ever played against his brother and if her ever scored on him. With the biggest smile of the night, Phil proclaimed that in 53 career games against his brother Tony in net, he scored 55 times. Sometimes Phil would even yell at his brother from the face off circle before the puck dropped, letting him know that he was going to score on him. 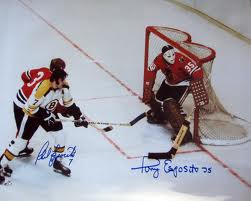 Surely this wasn’t the only story Phil shared with the huge crowd at the store. With each fan that approached the table, Phil had stories including some of his former teammates in Chicago like Stan Mikita & Bobby Hull.

One in particular about how they used to play up in Toronto and the coach at the time would let some of the veterans leave the game early so they had enough time to catch the train back to the states. Being a rookie, Phil never got this luxury and usually had to ride the bench until the bitter end of the game or be the benefactor of garbage time. In this  game the Blackhawks were down 6-2 to the Leafs with 3 minutes to go. After sending Mikita and Hull to the showers to catch the train, the call for Phil came to get into the game. While hoping over the boards to step on the ice Phil asked his coach ‘Do you want me to win it or just go out there and tie it up?’ Needless to say, after that wise crack Phil was told to sit back down and the game was finished with who they had on the ice.

Of all the things fans brought in for him to sign, Phil was really impressed with a scrapbook a fan started when she was 10 years old in the 1970’s. Every newspaper clipping Kris would find she would put into this book. When Phil flipped through the pages, he told Kris about every picture in the book. A true delight for Kris since she has been waiting for over 40 years to meet the man she idolized as a child. 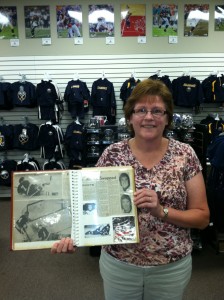 It was a really fun night and we could not have been more happy with the turn out. Phil Esposito is one of the greatest hockey players of all-time and has the 5th most goals in NHL history. He could’ve been anywhere in the world last night and he chose to hang out with the crew and patrons of Dave & Adam’s Card World. His unabashed laughter, sharp wit and passion for the game of hockey made us all richer for having been apart of this event.

We would like to thank everyone that came out and hope to see you all again soon. Here are some pictures from last nights evening with Mr. Phil Esposito. 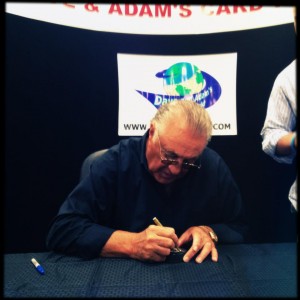 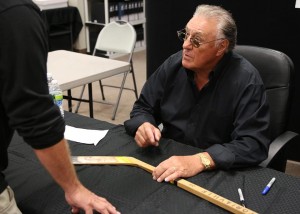 This stick has Phil’s face painted on the blade!! 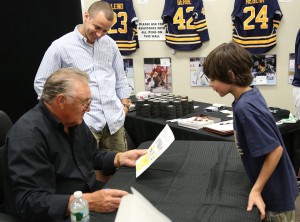 Owen came with a gift for Phil, a hand drawn picture. 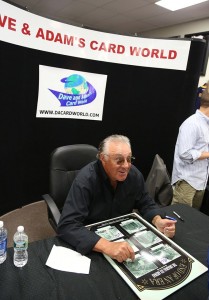 When signing an ‘Original 6 Arena’ sign, its appropriate to tell a story about each one. 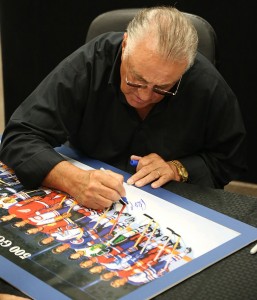 Dave and Adam's is one of the largest sellers of trading cards and collectibles in the world. Located just outside of Buffalo NY, the company operates two retail stores as well as the e-commerce website www.dacardworld.com
View all posts by Dave and Adam's Card World →
July ‘Hit of the Month’ Propsect Entry #5 – The Finisher Returns
Customer Feedback – 1965 Topps Baseball Set