For our second night of the Dave & Adam’s Week of Stars Event we had Baseball Hall of Fame Legend Dave Winfield in our Sheridan retail location. 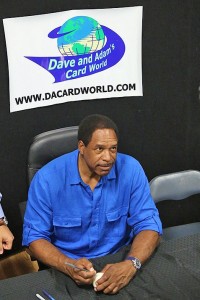 Dave & Adam’s had tons of items on hand for Dave to sign including 8 x 10 photos of him in both New York Yankees & San Diego Padres uniforms. The best items however were from fans as we seen some of the coolest retro jerseys and baseball cards come through the line. By far the two coolest items were a foul pole cover from the old Yankee Stadium and a bat that was actually used by Dave that accidentally left his hands mid swing and landed in the stands. As you can see below, he remembered the bat well and just had to take a couple swipes with it. 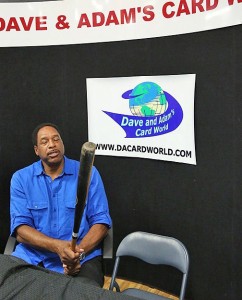 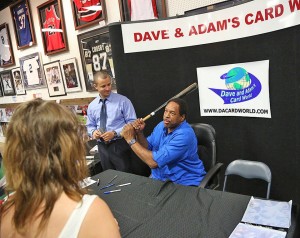 Wanting to interact with the fans, Mr. Winfield encouraged people to think of a question to ask him once they made their way to the table and he would do his best to answer it or tell a story about the topic. Here are a few of the questions and responses overheard from the signing.

Fan: What was your favorite stadium to play in?

Fan: Do you still stay in contact with old teammates?

Dave Winfield: ‘It was a lot easier when I was working in TV and Radio but now and days I still meet up with some of the old guys at Cooperstown or at a few ball parks I get to catch a game at.’

Fan: Who was your favorite Yankee to play with?

Fan: What was your most memorable moment wearing pinstripes?

Dave Winfield: ‘Well besides battling with Steinbrenner, I would say my most precious moment is the cumulative time spent with the guys. It was a great team and we came so close to winning it all, the ride was the best part. That and watching Ricky Henderson steal all those bases.’

Fan: Who was the toughest pitcher you ever faced?

Dave Winfield: ‘You would think it would be Roger Clemens or Randy Johnson but it is probably someone you never heard of before. There was this cat named J.R. Richards, he was 6’8″ and could hold 5 baseballs in one hand. He always had nasty stuff including a 95 mile per hour slider. There was actually a picture in the San Diego sports section one Sunday of me ducking out of the way from one of his pitches. I always made sure to say hello to him in public, that was not a dude you wanted to make mad.’

Fan: Do the New York Yankees and Boston Red Sox really hate each other?

Dave Winfield: ‘Not as much as they used to. These days the players talk more and since guys change teams so often everyone is pretty much friends and they get along well. Back in the day it was looked down upon and almost forbidden to go out to dinner with players from the other team. Today it happens so often that you would think these guys were friends for a long time.’

One of the highlights of the night came for a youngster who mentioned to Mr. Winfield he was working hard on a couple of his pitches including a curve ball. Dave gave some great advice in telling the young player to hold off on learning the curve since his arm isn’t quite developed yet and that he should learn a cut fastball instead. From there Dave went to show the kid how to hold the ball and when to release it all while explaining the mechanics and how the ball should move. Not only that but the benefits of learning the cut fastball and why waiting for a young arm to develop a little more before learning the curve ball can save careers.

Another great story Dave told was how he met his childhood idol Bob Gibson for the first time. It was before a game and Dave approached Mr. Gibson (as Dave called him) and introduced himself and extended his arm for a hand shake. Well Bob just scoffed at the young Dave Winfield and went back to reading his newspaper, refusing to shake his hand. Dave couldn’t believe it, the man who’s poster he had hanging on his wall as a kid would not shake his hand.

Fast forward to the game and Dave gets to face Gibson for the first time and strikes out. On the outside Dave was calm, cool and collected but as soon as he ducked away into the clubhouse he screamed and broke his bat over his knee. The second at bat was different since Dave cranked a home run off of Gibson and proceeded to taunt and point at the Hall of Fame pitcher while rounding the bases for not accepting his handshake earlier on. Well that must have made Bob Gibson mad because during Dave’s 3rd and 4th at bat all he did was throw at his head.By far that got the most laughter from the huge crowd in the Sheridan store on hand for the signing.

Just like Phil Esposito the night before, Dave Winfield proved to be a legend on the field as well as off it. His charisma and demeanor showed why he was loved by fans wherever he stopped to play baseball. Mr. Winfield is a true example of what retired players should become; An ambassador to the game and a leader of men, someone who should never stopped being idolized. It was a pleasure having Dave Winfield in our store and we wish him the best of luck with his future endeavors. Hopefully we can have him back soon.

Here are some more pictures from last nights Week of Stars event; 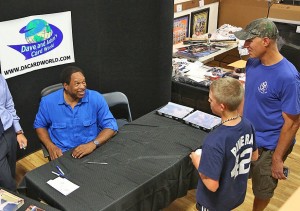 Finishing up his cut fastball lesson with a young fan. 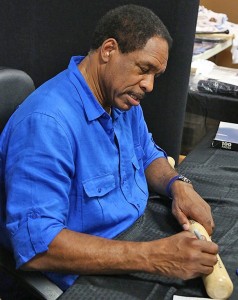 One of the many bats Dave signed. 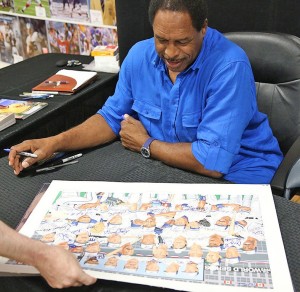 Dave’s was one of the last signatures needed on this fan’s Blue Jays team picture. 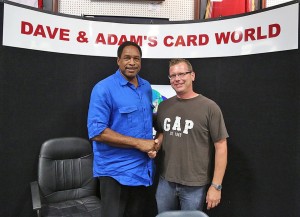 Dave was very gracious in taking photos with anybody that wanted one. 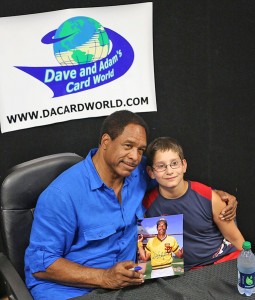 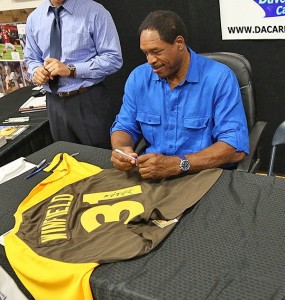 Still the coolest looking jersey he ever wore.

**The question and answer portion of this post was not a formal interview, but a recreation of the conversations between Dave Winfield and customers of Dave & Adam’s Card World.