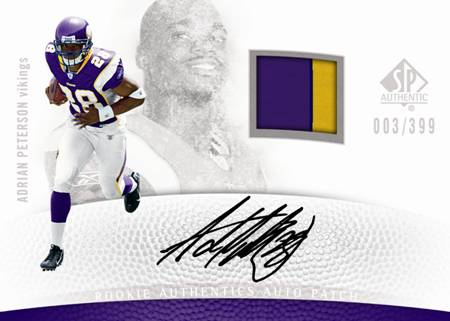 Carlsbad, CA – (February 11, 2008) – Year in and Year out, the SP Authentic Football product delivers the most sought after, and traditionally some of the most expensive rookie cards in the market.This year is no different.After hitting store shelves last week, collectors are rushing to find the 2007 SP Authentic Rookie Autograph Patch cards of Adrian Peterson.

After such a strong rookie season, and now after collecting MVP honors at the Pro Bowl, these cards are in such high demand, they are selling for between $600-$750 already in the secondary market.Peterson has predicted he will rush for 2,000 yards in 2008 and having won just about every award imaginable in 2007, collectors really feel like Peterson is a great investment.

Peterson is not the only rookie that is creating excitement in 2007 SP Authentic Football.Collectors are after already proven performers like Marshawn Lynch, Patrick Willis, Steve Smith, Ahmad Bradshaw, Kevin Boss, Trent Edwards, Calvin Johnson and Dwayne Bowe coupled with future stars like Kevin Kolb, Brady Quinn, JaMarcus Russell and Ted Ginn Jr.Even though the product has been in the market for less than a week, it is clear that based on its performance already that SP Authentic Football is truly the home of the most collected NFL rookie cards.

Rookies are not the only key driver in 2007 SP Authentic Football.The popular “By The Letter autograph insert allows collectors the opportunity to try to assemble the nameplate of the player’s last name for stars like Brett Favre, Bo Jackson, Joe Montana, Joe Namath, Dan Marino, Emmitt Smith and many more.The popular Chirography and Sign of the Times autograph inserts return as well.Every autograph is signed on the actual cards and there are multi-signed versions available too, some featuring up to four different players signing on one collectible trading card.

“SP Authentic Football is THE set that every collector saves up for every year, says Brandon Miller, Upper Deck NFL brand manager.”We receive more calls and e-mails regarding when it will be releasing than any of our other sets.It’s a testament not only to the strong history and collectibility of the set, but also to the fact that collectors know Upper Deck always adds more to it to make sure it’s a hit.With the “By The Letter set and some of the awesome multi-signed cards available, this year is no different.

Dave and Adam's is one of the largest sellers of trading cards and collectibles in the world. Located just outside of Buffalo NY, the company operates two retail stores as well as the e-commerce website www.dacardworld.com
View all posts by Dave and Adam's Card World →
New Product Releases 2/12/08
Health Benefits of Collecting?