A very good friend and customer of Dave & Adam’s sent over pictures of some Michael Jordan cards he bought from us over 15 years ago. These cards came from a time when the hobby was changing, with game-used jersey cards and one-of-one parallels becoming the things to collect. These Jordan cards are, without a doubt, some of the rarest from that era. 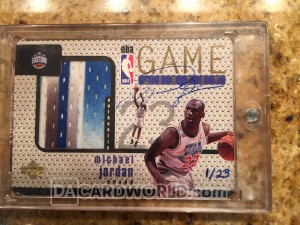 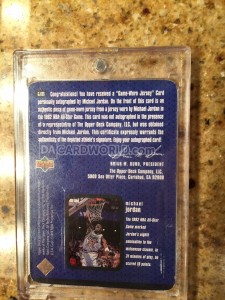 This is the first Michael Jordan autographed game-used jersey card ever produced. It includes a multi-color swatch from his 1992 All-Star Game jersey and is numbered 1/23. Earlier this year the card numbered 19/23 from this set, with a plain white jersey swatch, sold at auction for nearly $46,000. Who knows how much this card could fetch with it being the first of the series and having a multi-color swatch. 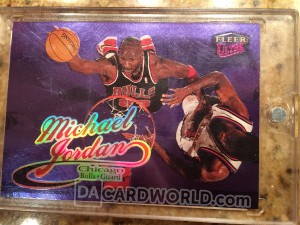 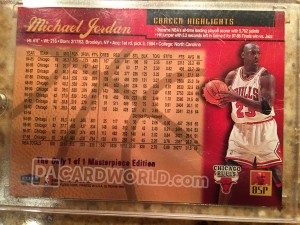 This one-of-one parallel from 1998-99 Fleer Ultra features Jordan mid-dunk with a purple background. Gold and Platinum Medallion versions of this card can be found occasionally, but this Masterpiece Edition has been safely tucked away for 15 years.  This card was pulled out of a pack by a collector in Massachusetts two days after 1998-99 Fleer Ultra Basketball was released. Adam flew out in a blizzard to buy this card from the collector, who then sold it to the customer that sent us this picture. To this day Adam gets asked by Jordan collectors if this card really does exist and now here is the proof. 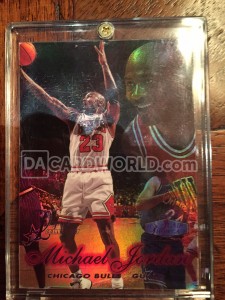 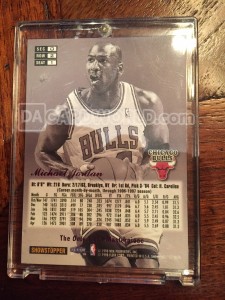 We are pretty sure this is the first Michael Jordan 1/1 card ever produced. The card has a purple foil finish when compared to the base card and has “The Only 1 of 1 Masterpiece” inscribed on the back. The collector that originally pulled this card purchased only two packs of Flair Showcase from a hobby shop in the Midwest. When he contacted Dave & Adam’s about selling the card he was stunned by our offer. He drove through the night to deliver the card because he was afraid we would change our mind. 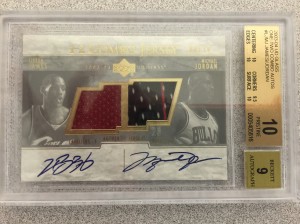 This last card was recently acquired by Dave & Adam’s. It just happened to come in at the same time we showcasing these Jordan cards and we wanted to include it in this piece.

It comes from LeBron James’s rookie season in the NBA and features jersey swatches and autographs from LeBron and Jordan. This is the only jersey auto combo from LeBron’s rookie year to feature the two legendary players. This card is now available through our eBay listings.

If you have a collection of rare cards you’d like to share with us or you are looking to sell your rare cards and collectibles please e-mail [email protected]rld.com

Dave and Adam's is one of the largest sellers of trading cards and collectibles in the world. Located just outside of Buffalo NY, the company operates two retail stores as well as the e-commerce website www.dacardworld.com
View all posts by Dave and Adam's Card World →
Dave & Adam’s “Leaders of the Pack” for Week 10
Previewing NASCAR’s Championship race