Hello everybody and welcome back to another Dave and Adam’s FNM recap. Let’s dive right in to our results with our modern winner, Ian MacDonald: 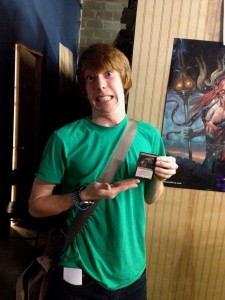 Ian was running what’s now known as Jeskai Control, formerly Red-White-Blue, American, etc. The deck looks to control the game using its countermagic like Mana Leak, its spot removal like Path to Exile, Lightning Helix and Lightning Bolt, its sweepers like Wrath of God and Supreme Verdict, and eventually close out the game using its haymakers like Gideon Jura, Restoration Angel and Celestial Colonnade. The deck is also entirely capable of using its suite of burn spells to finish off an opponent that
was a little too aggressive with their fetch lands and shock lands. Ian also has some interesting tech in his sideboard. Trickbind doesn’t see a lot of play in Modern, so most people wouldn’t think to play around it, but it does have some clever applications in this format. Trickbind allows you to stop any infinite combo you may encounter, from Melira/Angel Pod’s “infinite” life/damage combo (or even the Birthing Pod activation if you’re feeling especially mean) and the namesake combo of Splinter Twin for a turn, but it also acts like Stifle did in Legacy, allowing him to counter his opponents fetch land activations, essentially Time Walk-ing them. He could also potentially bring it in against the mirror match, preventing opposing Tectonic Edge activations.

Congratulations also go our to our Standard winner, Andrew Bloomingdale

Want to see even more decks and crazy interactions? Come to our Friday Night Magic tournaments at our Transit Road location every week for Standard, Modern, Draft, and coming soon – Commander!

Dave and Adam's is one of the largest sellers of trading cards and collectibles in the world. Located just outside of Buffalo NY, the company operates two retail stores as well as the e-commerce website www.dacardworld.com
View all posts by Dave and Adam's Card World →
Walk a mile (or nine) in our shoes…
Dave & Adam’s “Leaders of the Pack” for Week 14