By Dave and Adam's Card World on December 10, 2014 in Dave and Adams News, Gaming News & New Products, Magic the Gathering

Welcome back to another Dave and Adam’s Friday Night recap. We had two new winners this week, starting with our Standard winner, Tyler Bajer. 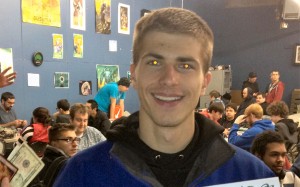 1x Back to Nature

2x Anger of the Gods

Tyler ended up going 4-0 with his Temur Monsters list. Red/Green/x Monsters has been very popular in the competitive Magic scene for the last few years, and Khans of Tarkir has offered a new color combination for people to try out. Monsters looks to constantly have the biggest creature in play and use that advantage to close out the game in the middling turns. The light splash of Blue allows the deck to play Savage Knuckleblade, a card that, when it was first spoiled, everyone thought was going to be a powerhouse but has yet to find a home elsewhere. On top of that, the deck plays big, resilient threats like Ashcloud Phoenix, Polukranos and Stormbreath Dragon to finish off the opponent once they have the advantage.

Moving on to Modern, our winner from this week was Joe Santini: 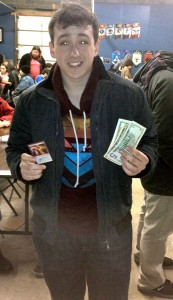 1x Bonfire of the Damned

Joe took Blue/Red Delver to the top of the Modern standings this week. Delver is what’s considered a tempo deck, meaning it plays an early threat and uses removal and evasion to keep punching damage through. It uses Lightning Bolt, Izzet Charm and Electrolyze early to clear blockers out of the way of Monastery Swiftspear or uses Vapor Snag to temporarily clear anything that his burn spells can’t. Joe seems to have set his deck up to use Young Pyromancer as much as possible, running a full 10 “free” spells in Gut Shot, Mutagenic Growth and Gitaxian Probe (even if casting all of them for “free” would cause him to lose the game). Maindecking Gut Shot also implies that Joe was expecting a lot of 1-toughness creatures, which isn’t unreasonable in a world with U/R/x Delver and Robots being two of the most popular decks. Blood Moon also comes out of the sideboard to give opponents a difficult time if they have greedy mana bases.

Stop in to our Transit Rd. location this and every Friday night for even more Standard, Modern, drafts and now even Commander.

Dave and Adam's is one of the largest sellers of trading cards and collectibles in the world. Located just outside of Buffalo NY, the company operates two retail stores as well as the e-commerce website www.dacardworld.com
View all posts by Dave and Adam's Card World →
2014-15 Panini Paramount Basketball preview
2014 Bowman Sterling Football preview