From August 11th through 14th we hosted our first annual Hockey Fest at all four of our Western New York area stores. We had tons of sales on hockey cards and apparel. We were also fortunate enough to work with some great companies who co-sponsored the event and provided giveaways including Beckett Media, Fathead, and the Upper Deck Company.

But most importantly, we brought in some of the biggest names in hockey. On four consecutive days we had Gordie Howe, Tony Esposito, Steven Stamkos, and Gilbert Perreault each signing at one of our four Buffalo area stores.  These hockey legends were outstanding as they posed for pictures and interacted with fans. 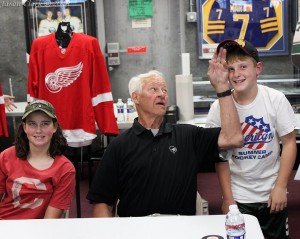 Mr. Hockey posing with some young fans and having some fun with a Blackhawks hat. 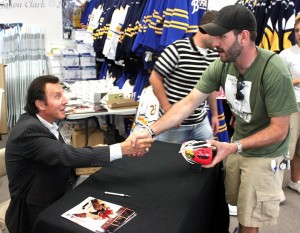 Like all of the athletes, Tony Esposito was very cordial with fans. 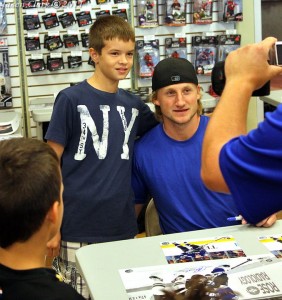 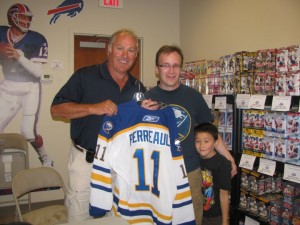 Gilbert Perreault with a life long fan and his son.

Overall it was an awesome event as we’ve had many fans let us know what a thrill it was to meet these players. It was also a great time to celebrate hockey card collecting. We look forward to bringing more collecting focused events like this to our customers in the future. Thanks to all the companies who participated in the event and to everyone who came out to our stores!

If you’d like to purchase autographed memorabilia from the signings check out our Hockey Memorabilia section.

For more information on our four stores check out our Dave and Adam’s Store Facebook Page.