As part of the #CollectConnor frenzy sweeping the hockey collecting world this season, Upper Deck has created a special 12-card set documenting the rookie seasons of the two biggest names to make their NHL debuts with the Edmonton Oilers.  2015-16 Upper Deck Connor McDavid/Wayne Gretzky Biography of a Season Series 1 takes a look back some of the milestones and memorable moments from each player’s arrival on hockey’s biggest stage. 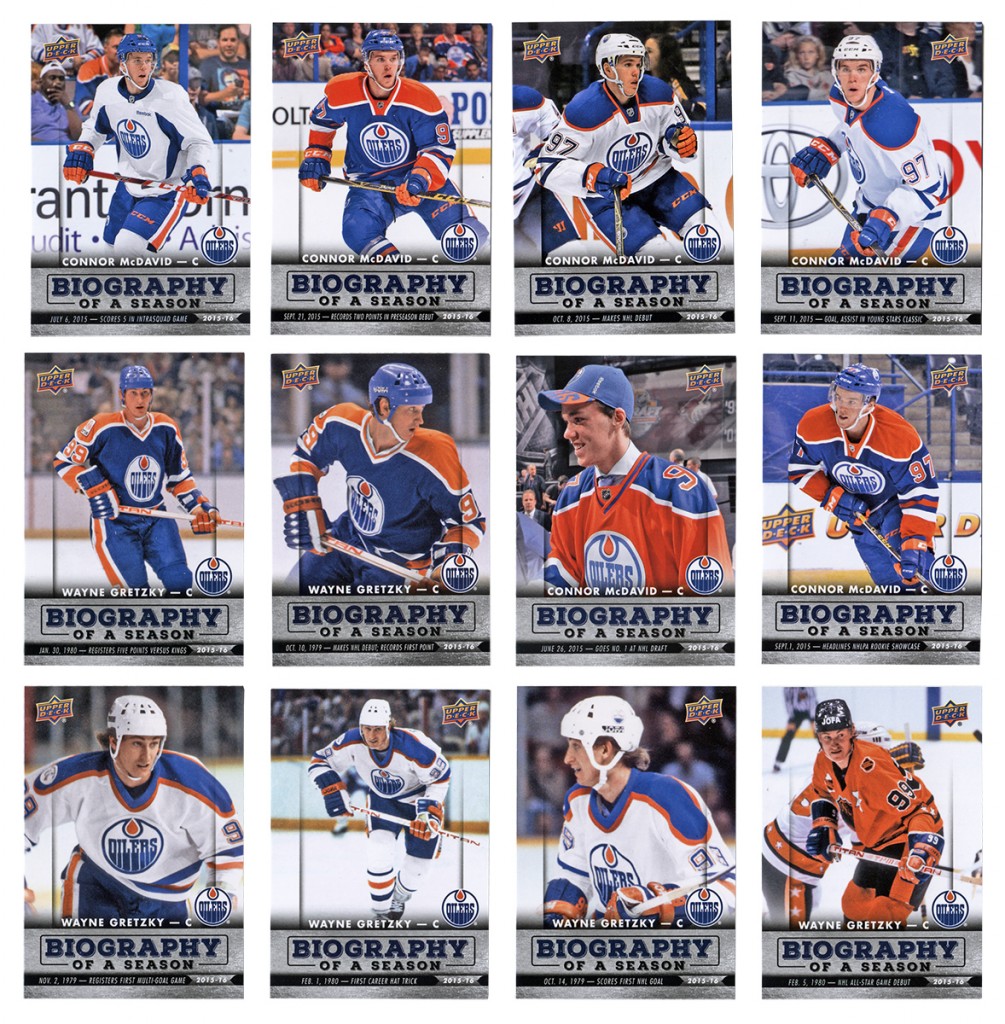 The six cards devoted to Connor McDavid traces the steps McDavid made on the way to his professional debut, starting with the 2015 NHL Entry Draft, when he was selected first overall, and culminating with his first NHL regular season game. The six Wayne Gretzky cards look back at the first half of Gretzky’s first NHL season, (he had previously made his professional debut in the WHA) from his first game to his appearance in the 1980 NHL All-Star Game.

Collectors can get this set from Dave & Adam’s by purchasing boxes of 2015-16 Upper Deck Full Force Hockey. You will receive one set with the purchase of a four-box lot of Full Force, two sets with an eight-box case and four sets with every 16-box case.

Full Force Hockey is great product to find rookie cards of Connor McDavid as well as other members of the 2015-16 rookie class, including Jack Eichel, Max Domi, Dylan Larkin, Noah Hanafin and Artemi Panarin. Look for a Full Force Freshmen 3D Lenticular rookie card in every box. You can also find autographs of McDavid, Gretzky and more NHL superstars.

Upper Deck Connor McDavid/Wayne Gretzky Biography of a Season Series 1 was a limited edition product. Other outlets sold out of their allotments quickly, but you can get yours now from Dave & Adam’s.

Dave and Adam's is one of the largest sellers of trading cards and collectibles in the world. Located just outside of Buffalo NY, the company operates two retail stores as well as the e-commerce website www.dacardworld.com
View all posts by Dave and Adam's Card World →
2016 Topps Allen & Ginter Baseball preview
Postcards from a trip to France