Dave & Adam’s Card World is partnering with Toronto-based sports memorabilia company, A.J. Sports World, to bring Buffalo Sabres prospect, Jack Eichel, to their Buffalo-area retail stores for a series of autograph signings. Dave & Adam’s will be the exclusive outlet for public autograph signings with the second overall pick from the 2015 NHL Draft for the next three years. 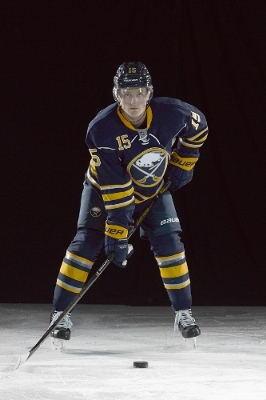 In addition, Dave & Adam’s will offer an exclusive line of autographed Jack Eichel memorabilia through their stores and retail website (www.dacardworld.com).

“We are ecstatic to be working with A.J. Sports World to bring Jack Eichel to our customers for these signings”, said Dave & Adam’s CEO, Adam Martin. “We have worked with them in the past and have a great relationship with Andrew and his staff.”

A.J. Sports World, located in Vaughn, Ontario, is an industry leader in authentic autographed sports memorabilia with over 20 years of experience. They have exclusive relationships with a number of current and retired hockey stars, including Steve Yzerman, Connor McDavid, Jarome Iginla and Doug Gilmour. For more information log on to www.ajauthentic.com.

Dave & Adam’s Card World has two retail locations in Western New York, including their 40,000-square foot “Superstore” at 8075 Sheridan Dr. in Williamsville, NY and a second location at 2217 Sheridan Dr. in Tonawanda, NY. You can also shop online through their website www.dacardworld.com.

This past Monday, Leaf Trading Cards announced they signed Eichel to an exclusive autograph trading card agreement. Eichel’s first official autograph card will appear in 2015 Leaf Superlative Hockey, which comes out in November.

Dave and Adam's is one of the largest sellers of trading cards and collectibles in the world. Located just outside of Buffalo NY, the company operates two retail stores as well as the e-commerce website www.dacardworld.com
View all posts by Dave and Adam's Card World →
#DACWPulls: Wiggins 1 of 1 from Immaculate Baseball!?!?
Dave & Adam’s makes their way to San Jose this weekend