By David Yarger on October 5, 2022 in Behind the Scenes, Dave and Adams News, Featured Articles, Hit Parade, Press Coverage

HP awarded Repack Brand of the Year for third-consecutive year

It’s been an informative and fun few days at the Industry Summit in Las Vegas, but Wednesday the event concluded with some awards handed out to some of the best breakers, companies, cards and more.

Our own Dave & Adam’s Card World took home two awards, while Hit Parade added to its collection, winning Repack Brand of the Year for the third-straight year.

The Local Card Shop victory is big for the Buffalo Dave & Adam’s Card World, as the store only continues to grow and will be receiving major upgrades over time. Meanwhile, for the Netherlands location in Roermond, it’s a huge honor, especially for being open only roughly around two months now. The location has provided product to European hobbyists where getting product was once very limited. 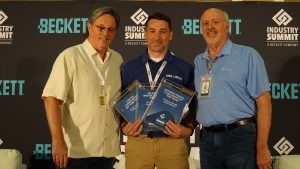 Back when the store officially opened, Adam Martin, Dave & Adam’s Owner and CEO said, “We are happy to partner with Panini, Topps & Upper Deck with this exciting venture for our company. Traditionally, trading cards have not been as popular in European countries as they have been in other parts of the world. We feel that this is mainly due to the fact that supply of hobby products in Europe has been very limited. Our plan is to change that.”

For Hit Parade Director of Product Development Tom Hughes, winning the Repack Brand of the Year for a third-consecutive year was a big honor. 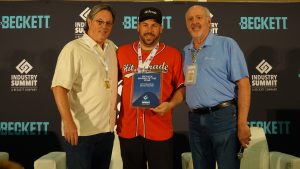 “It’s pretty awesome,” he said. “It’s really a thank you to everyone who voted for us, everyone who buys our product. It’s very special to be here to win three times in a row. I think it shows how much we stand behind our product. We’re constantly trying to grow and do new things. This year was really pushing with breakers and doing exclusive products. We’re just rolling out a hobby shop program. So (we’re) just constantly trying to evolve and stay ahead of the hobby and bring new things to people that might not be out there right now.”

To discover more on the three-time repack brand of the year Hit Parade, visit their website. For more information on everything Dave & Adam’s Card World related, visit dacardworld.com or visit all the social media platforms here.

To see more from the 2022 Industry Summit, watch the D&A recap here.

View all posts by David Yarger →