Blog Homepage \ Dave and Adams News \ Back to work blog

Back to work blog

Well my three day snow-cation has come to an end. With my driveway snowblowed (four times) and streets plowed, I was able to venture into the Dave & Adam’s headquarters today. I had to endure the first wave of the “Snowvember” storm on Tuesday that dumped two and a half feet on my house, but I was fortunate enough to have been missed by most of the the second wave that dumped an additional 1-2 feet on other parts of the Western New York area. 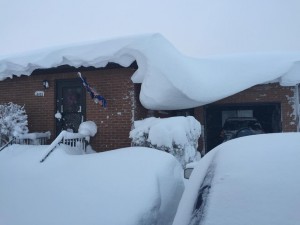 That’s the front of my house on Wednesday morning. The house faces east, so when the wind blows from the west it causes the snow to hang over the edge of the roof like that.

This storm has been like nothing this Western New York has dealt with in nearly 40 years, and that includes two blizzards last winter. The hardest hit areas received as much as six feet of snow this week. The National Guard was called in to help remove snow and help rescue people trapped in their cars.

Dave & Adam’s has done their best to remain “business as usual” during this storm. As I detailed in my previous snow blog, Dave & Adam’s offices are located north of the areas that were impacted the most by snow. We did close on Wednesday when the entire WNY area received some snow, but we reopened on Thursday. The shipping department has gotten caught up on getting orders ready to go out. UPS wasn’t able to pick up from us on Thursday, but we did load up a truck and drove it to a shipping depot to get some packages. We will be getting a UPS truck here today to pick up more packages. On behalf of Dave & Adam’s I would like to thank our customers for their patience and understanding as we worked through this situation.

Our local sports teams have had their fair share of issues dealing with the weather. The Buffalo Sabres postponed a game they were supposed to play Friday against the New York Rangers. One of the Sabres’ players, Patrick Kaleta, couldn’t play for the team Tuesday night because he was snowed in at his home in Hamburg.

The Buffalo Bills had to move Sunday’s game against the New York Jets to Monday night in Detroit because their stadium is located in one of the areas hit hardest by the snow. Ralph Wilson Stadium is buried in about 220,000 tons of the white stuff. Before the NFL decided to move the game, the Bills were planning on paying people $10.00 an hour and give them free tickets to help clear the snow from the stadium.

The Bills players have also been unable to practice all week because many of them have been stuck in their homes. The players did keep themselves occupied by playing with their kids, helping their neighbors shovel and helping legendary Bills quarterback Jim Kelly plow his driveway. The Bills left for Detroit on Friday so they could practice before Monday’s game. With some residential streets still not plowed, the team needed snowmobiles to help get some players to the bus that took them to the airport.

While the snow has stopped there some major problems that the area still has to deal with. Some buildings are starting to collapse because of the weight of the snow on their roofs. Plus there are serious concerns about flooding because the temperature is supposed to be in the 50’s and 60’s by Sunday and Monday. This will cause all that snow to melt quickly.

I would like to say that things will return to normal next week, but Thanksgiving is just six says away. Dave & Adam’s will be busy preparing for our huge Black Friday Sale, which begins Thanksgiving night.

Have a great weekend and hopefully we won’t be washed away when the snow melts.

Here’s some fantastic footage from the storm taken by someone’s helicopter drone.

Dave and Adam's is one of the largest sellers of trading cards and collectibles in the world. Located just outside of Buffalo NY, the company operates two retail stores as well as the e-commerce website www.dacardworld.com
View all posts by Dave and Adam's Card World →
Panini releases statement on mistakes in 2014 Flawless Football
Dave & Adam’s “Leaders of the Pack” for Week 12