What’s Up in the DACW Live Lounge – September 7th

By Dave and Adam's Card World on September 7, 2016 in DACW Live Breaks

It’s been a long time coming but it’s finally here. My favorite hockey release has finally hit the shelves; 2015/16 Ultimate Collection. I think “UC” (as I call it) gets lost in the shuffle a bit. It’s a high-end release that comes at the heels of the hockey dead-zone and frankly in the eyes of buyers “isn’t Cup”. I totally understand all of that and you know I love Cup too, but I feel you can get much more impressive looking cards in Ultimate Collection at nearly half the price that still can demand super high prices on the second hand market. Overall I was undoubtedly super pumped to rip it and we got some cool hits. We pulled several laundry tag relic cards with the best being the 5/5 Panarin relic shown and that awesome Dual Flames partial-Reebok patch relic. However, our biggest hits were unfortunately (for me at least) redemptions. Most notably of which is the pictured Connor McDavid auto and the not pictured Artemi Panarin /10 RPA. While I personally think last year’s base rookie autograph card design was better than this year its still a great product with some fabulous looking cards and McDavid rookies that can be potentially worth a fortune down the road. 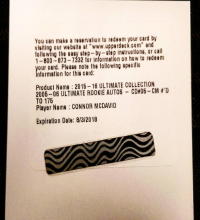 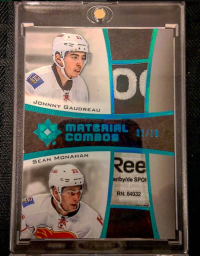 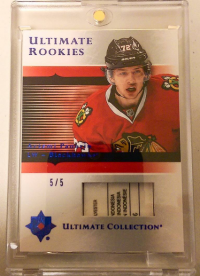 As much as Sean and I bicker and bash on one another it’s essential to our partnership and I have to give credit to the big oaf when it’s due. Last week, he broke a basketball mixer that frankly, kicked a**. It felt like every single other pack he was hitting something big. While that’s what we intend to happen in mixers it should be me pulling the big hits. The highlights of which were autos of some cats named Michael Jordan, Kobe Bryant and Bill Russell. The 14/15 SP Authentic Exquisite Jordan auto we’ve (thankfully) seen a couple times but I was much more impressed with the two /10 autos. The Kobe relic auto features a great patch from a much underrated product of 15/16 Luxe Baskteball and I have never seen a Bill Russell Red, White, & Blue Auto from Intrigue Basketball, and we have opened more of that than I can count!  We seem to be getting the hang of these mixer breaks because we’ve had some phenomenal ones lately. 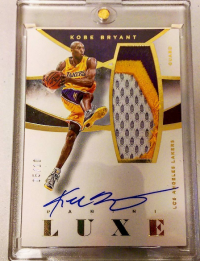 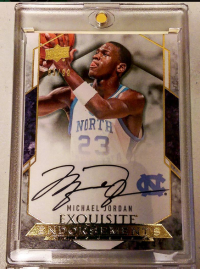 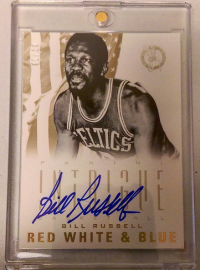 Lately, we have broken a ton of 2016 Upper Deck Goodwin Champions, and with Sean and I being big fans of the brand we couldn’t be happier. Goodwin Champs is a set that really doesn’t focus on anything specific and that’s the appeal to collectors of the set. With tons of subsets that go as far away from the conventional sports cards as they can get, the product still features big name athlete hits. To keep the set interesting they are made extremely limited and near impossible to pull. But we achieved the impossible with this Lebron James auto. While it’s a redemption (sigh) this card’s stated odds are 1:17,310 packs. To give you a little perspective that’s one every 52 cases! I’ve included the Upper Deck mock-up as to what it should look like. 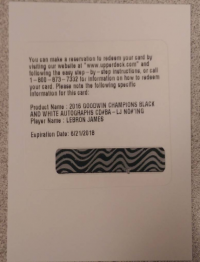 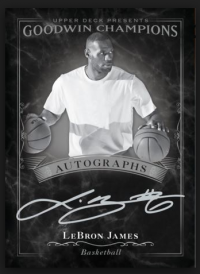 I am declaring a split decision for my favorite hit. I don’t want to have to decide between my Yankees or Sabres. So here they both are! An amazing Dominator buyback auto from 15/16 Buybacks Hockey and a 2016 Bowman Inception Origins auto of The Judge! Prior to this year the Inception Black Canvas Silver Ink autos were called “Bowman Black” (personally one of my favorite sets) curiously they are called “Origins” which is the same name as this year’s Panini Football release which took the place of Inception once they got the exclusive deal with the NFL. It’s probably just an unintended coincidence but maybe I’m on to something… 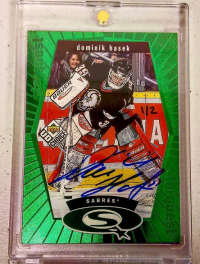 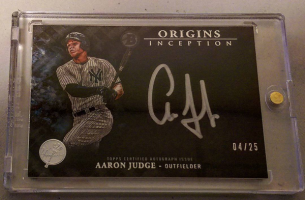 That about wraps it up for this edition, football season is so close I can almost taste it! Join in our Weekly Fantasy Point Football Breaks that will go on through the season. Sean and I made it super easy to win a lot of great prizes as the weeks go by!

Dave and Adam's is one of the largest sellers of trading cards and collectibles in the world. Located just outside of Buffalo NY, the company operates two retail stores as well as the e-commerce website www.dacardworld.com
View all posts by Dave and Adam's Card World →
Gearing up for a Cause
What’s Up in the DACW Live Lounge – September 16th