What’s Up in the DACW Live Lounge – June 15th

Hello loungers! I’m bringing you a bit of a different blog entry this week. Rather than have a review of the group breaks I’m going to have a recap of just one personal break and trust me it’s for a good reason. Obviously this personal break would have to be absolutely out of this world in order for me to feature it and I would say its even better than that. Here is the link to the video if you don’t want it spoiled!

Last Friday Lounge veteran Justin put in a personal order to start off his weekend of his usual favorites: 2015/16 Upper Deck Ice Hockey, 2014 Upper Deck SP Game Used Golf, 2014 SP Authentic Golf, 2016 Leaf Best of Hockey and Hit Parades of Golf’s Best & Chase for the Cup. Pretty fun break before it’s even opened. We start with the 2015/16 UD Ice box and within it is the biggest hit of the year so far; the ever elusive Connor McDavid Premiere Patch Auto /10. Some would argue that these are the top rookie hits in the entire ICE set. Recent listings on eBay have them well into four figures and based on his performance and condition of the card should only go up and up. If you watch the video of the break you can tell when I saw the card once I opened the pack it was an unbelievable moment, when you think about the odds of pulling THAT card out of just ONE box your brain starts to melt. 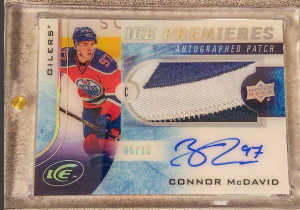 We move onto the Golf boxes and it gets just unfair, we crack off TWO straight Rory McIlroy rookie autos in SP Game Used and the Golf’s Best Hit Parade! Both of which are case hits, so that’s three case hits IN A ROW. The SP Authentic box yielded a nice Danica Patrick /10 auto which is a part of an extremely limited set (not pictured). 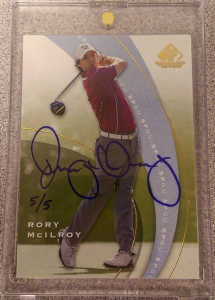 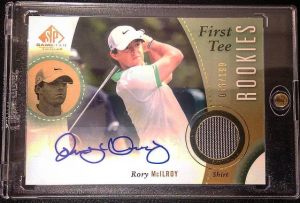 It doesn’t stop there; the Leaf Best of Hockey and the Chase for the Cup Hit Parade are left, obviously destined with huge hits based on the last boxes. The whole room expected a crazy Jack Eichel hit from Leaf and a Sidney Crosby Cup redemption in the Hit Parade. We were not disappointed as a fantastic Sidney Crosby Rookie Inscription auto popped out of the Hit Parade and a cool dual Gretzky/Howe stick relic card hit out of Leaf (not pictured).

Considering he just won another Stanley Cup I think it was as good a time as ever to snag this! 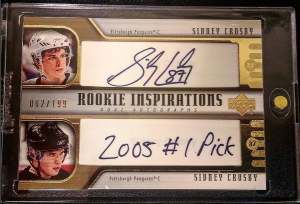 Obviously with a hot hand Justin adds a few more boxes to his order and incredibly pulls ANOTHER Connor McDavid auto. That’s right two boxes; two McDavid autos. Absolutely incredible, this also continued our McDavid streak to 5 in 3 days. We end the night with another Chase for the Cup Hit Parade and of course there is a Alex Ovechkin Cup RPA redemption sitting in there with a Mario Lemieux auto. This was a huge break that could potentially net his 10x what he spent (If he wins the Ovie RPA). 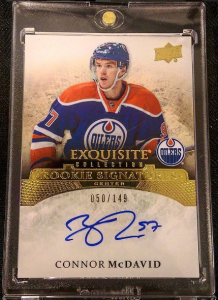 Breaks like this sure don’t come around every day but when they do it needs to be reported!

REMINDER –  We will be breaking LIVE at the 2016 NHL Draft with Upper Deck! We have four discounted hockey breaks up on the site that you don’t want to miss out on!