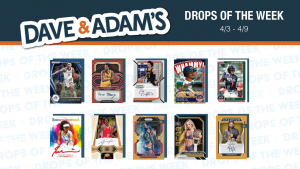 Last night closed out another Wrestlemania weekend in the world of sports entertainment. We saw Stone Cold Steve Austin and Mr. McMahon like it was 1999, all over again.

We saw the emergence of rising stars and entertaining performances of the mainstays.

Based on what I’m seeing on Twitter, it looks like it was a success for the WWE. Riding the hype of the television product, collectors can stay hype on the new card product due to release this week.

Ladies and gentlemen, boys and girls. Let’s get ready for DA Drops!

After Wrestlemania, there are usually some surprise debuts or returns in the WWE. Similarly, Panini is debuting its 2022 WWE Prizm product on Wednesday.

The box will feature two autographs and 22 Prizm parallels on average.

Another chase in this product is the “ultra-rare” Color Blast insert.

There are 12 packs per box with 12 cards per pack.

Sports Entertainment to just straight-up entertainment seems to be the appropriate transition here, with an Upper Deck product headed to shelves this week.

According to Upper Deck, each box contains at least two hits from an autograph, memorabilia, manufactured patch, lenticular, relic, or other special inserts.

It is also said to contain six Base Set Platinum Variants and possibly, a Goudey Platinum Variant, Six Splash of Color SPs, and Goudey cards, coming as a first in the product’s long history.

Look for parallels, including Orange Prism, Pink Traxx, Cosmic, Purple Pulsar, Green Wave, and Golden Treasures, with each card #’d to 99 or less.

Also new to Goodwin Champions in 2021 is Feathered Creatures. It is a “five-tiered aggregation” of embroidered manufactured patch cards of birds. Upper Deck says this is a unique 100-card set.

In the 2021 product, there will also be a new set of Goodwin Playing Cards featuring “original art and vibrant technology,” Upper Deck said.

The set features a 150-card base set with 100 regular cards and 50 Splash of Color SP cards.

Back by popular demand in 2021 Goodwin Champions is the Exquisite Collection Signature Kicks cards. Upper Deck says each card will contain swatches from the signature brand shoes of athletes, past & present, with every autograph being hard-signed.

There are 20 packs per box and five cards per pack.

Topps says the base cards feature the most notable and celebrated characters, creatures, and droids across the Star Wars galaxy.

Along with the Lucasfilm 50th Anniversary, collectors should look for two other new insert sets in Out of the Box and Welcome to the Dark Side.

Topps also says autographs will come from actors across the saga, including the prequel trilogy, the classic trilogy, the new trilogy, Solo, Rogue One, The Mandalorian, and The Bad Batch.

There are also Autographed Pen Relic cards that feature the pen used by the actor while signing embedded in the card.

Masterwork is four packs per box and five cards per pack.

We are days away from Opening Day 2022, but in the meantime, we get a look at the future of baseball in the form of spring training.

Panini will also have the future of the sport when it releases 2021 Stars & Stripes Baseball on Friday.

The company says the Stars & Stripes product showcases baseball talent in the country, from 13U to the Collegiate National Team.

Collectors should look out for five auto or memorabilia cards per box.

Also, collectors can hunt for Whammy inserts. These are former USA baseball greats and Hall of Famers.

There are five packs per box and eight cards per pack.

Panini is bringing more to shelves this week. Also due out this Friday is this year’s Panini Prizm Draft Picks Basketball. This year’s product contains autographs, parallels, and inserts of the 2021/22 NBA rookie class’s top talent in their college uniforms.

There are officially licensed rookies and autographs from Cade Cunningham, Jalen Suggs, and Evan Mobley. And that’s only the tip of the iceberg.

Inserts include Fireworks, Widescreen, and Instant Impact, to name a few.

There are four autographs, four silvers, eight parallels, and four inserts per box.

Prizm Draft Picks Basketball is four packs per box with ten cards per pack. So if you do your math correctly, that should be an auto per pack.

There’s also a slew of Pokemon coming out this week. It looks like they will go live on Friday. Below I’ll give you the proper breakdown of what each product will contain.