Looking for something to show the card collector in your life just how much you love them this week? We’ve got a whole menu of options to choose from below.

It’s off to the races in this week’s edition of DA Drops!

The ever-popular Formula 1 Racing is back with the 2021 Topps Formula 1 Hobby Box. Fans of the sport can expect that drop on Wednesday.

Topps also says Formula 1 combines the 2020 season with a look ahead to the 2021 season.

In the Formula 1 set, there are F1 relics featuring race-worn suits from the top drivers.

The base set is 200 cards, but collectors can look for all-new Apex Predator, Debrief, Flags of Foundation, and Topps 1961 Sports Cars inserts.

Formula 1 comes 18 packs per box, with eight cards per pack.

Check out the full breakdown of Topps F1 Hobby by clicking here.

Topps isn’t done with releases this week. They arguably have the biggest release of the week coming out on Wednesday with the release of 2022 Topps Series 1 Baseball Hobby and Jumbo boxes.

Dave and Adam’s got the opportunity to be official breakers for the annual Topps Rip Party on Tuesday night, into the early hours of Wednesday, where two teams of two got to rip five cases of Jumbo Series 1. You can catch some of the replays here.

Topps says the silver packs include MLB vets, rookies, and retired greats on chrome cards. Collectors should look for numbered autos and parallels in those packs.

As for the Series 1 Hobby, Topps says it will have 24 packs, 14 cards per pack, and one silver pack.

There will also be one autograph or relic card per box. Series 1 is a 330-card base set with plenty of inserts and rookies.

To see a breakdown of the product, click here.

Leaf’s back this week with another 2021 set. This time around, it’s the Pro Set Power Football Hobby Box.

“What makes this release fantastic is not only the incredible selection of NIL athletes (who should be the elite NFL prospects of the next several years) but also the inclusion of some of 2021’s hottest rookies as well,” Leaf says.

Collectors should look for ARC (Amateur Rookie Cards) of stars of college football, as well as a handful of the top high school prospects in the country in the Pro Set Power.

Also, be on the lookout for Leaf’s final XRC Rookie Cards of 2021 NFL Draft picks.

The hobby box comes with seven autographs per box and is due out Friday.

Panini is looking to start NBA All-Star Weekend the right way this Friday with its release of 2021/22 Donruss Elite Basketball.

The hobby box comes with two autos, eight inserts, eight parallels, and two base rookies per box on average.

Collectors can chase Status and Aspirations Die-Cut parallels in this year’s Donruss Elite as well as the brand new “one-of-a-kind” Base Elite parallel.

Also new in the chase are the Super-Short Printed Lenticular cards in the Dimensions, Next Up, and Past and Present sets, Panini says.

Look for key rookies such as Jalen Green, Scottie Barnes, and Jalen Suggs.

Donruss Elite is 20 packs per box with eight cards per pack.

Rounding out this week’s DA Drops, Wizards of the Coast is releasing the latest in the Magic The Gathering series.

On Friday, collectors and fans of the TCG will see the new Kamigawa: Neon Dynasty.

In the Collector Booster Box, collectors will find one rare/mythic extended art card, one rare/foil mythic card, nine foil commons/uncommons, three showcase frame cards, one ancillary card, and one foil token. That comes with 12 packs per box and 15 cards per pack.

As for the Commander Deck, players and collectors will find a 98 card deck, one foil commander card, two foil legendary cards, ten double-sided tokens, one deck box, and one life wheel.

The Draft Booster Box of Kamigawa: Neon Dynasty will have 36 packs per box, with 15 cards per pack.

And last, but certainly not least, is the Theme Booster Box for Neon Dynasty. It comes with 35 cards from the set in each pack and one mythic or rare. There are 12 packs per box. 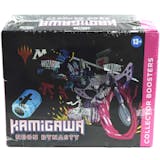